How does Ymir turn back into her human form?

Late in the manga, we know that titans are actually transformed humans, and that not all people who transform into titans can turn back into human form.

I did a lot of research on Ymir and there are many theories regarding how she turns back to her human form for the first time. How does it work?

The answer contains heavy spoilers to anime watchers. You have been warned!

It's been heavily hinted (almost confirmed, really) that titans are created by transforming humans in some way. Ymir was transformed to a mindless titan over 60 years ago, and was unable to return to her human form for a very long time.

We already know that several powers (such as titan shifter powers, titan control powers, and "The Memories") can be transferred by eating. This conclusion was reached by Hanji in chapter 57.

When Ymir ate Reiner's and Berthold's friend (who was also a titan shifter), she gained his titan shifting abilities, and was able to return to human form.

I wanted to update this question because the answers are outdated, and all of this information has been revealed in Chapter 89.

Please note, spoilers ahead, read at your own risk.

In Chapter 89, pages 8-18, we see a summary of Ymir's life in chronological order.

Ymir was originally an Eldian begger in the Marleyan internment zone for Eldians. As a child, she was caught associating herself with Ymir Fritz cultists, and she took the punishment for the cultists. As a result, she was sentenced to life as a mindless titan, taken to the penal colony Island Paradis, injected with titan serum in her spinal fluid, and shoved off the wall into the territory. This results in her roaming the titan territory of the penal colony for 60 years as a mindless titan. 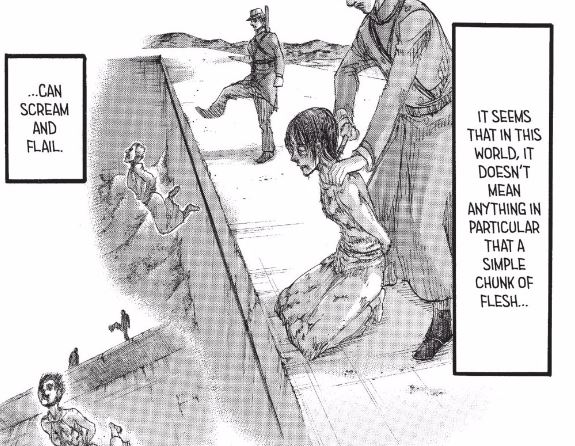 At some point Ymir

hibernates in the earth under dirt and brush until 845 when Reiner, Marcel, Bertholdt, and Annie accidentally stumble upon her in hibernation. Marcel, seeking to save Reiner, sacrifices himself when Ymir tries to eat Reiner. Since Marcel was a titan-shifter he passed on his powers to Ymir, and Ymir regained the ability to shift back to human form. So, in essence, Ymir was only able to return to her human form because she ate a titan-shifter and then became one. All of this was entirely by accident and never meant to occur. 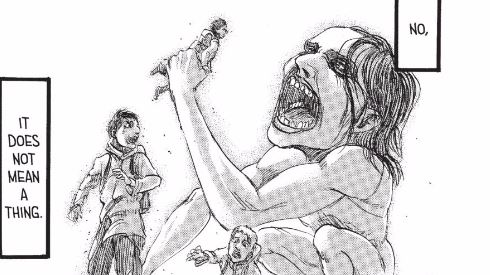 So how did Ymir turn to a titan

So she was in Marley,Marley is a place beyond the walls. Eldians found her and called her Ymir after Ymir Fritz. She was worshipped. She was caught by Marleyians and was sent to Utopia. Utopia is a place that turns people into mindless pure titans by injecting titan serum. She roamed the earth for over 60 years. She was hibernating under the ground. Reiner and Bertholdt’s friend saved Reiner from being eaten and got eaten instead. So she turned to a Human for eating a Titan shifter and got his powers. So That is It.

Just the same as Eric the titan body falls dead at her comand and she foracess her way out through the back of the neck. It gross but awesome.

4
How did the Female Titan manage to get out of her titan form and escape while surrounded by a horde of titans?
7
What happened to Eren that made him unable to turn into a Titan in chapter 53 of the manga?
24
How did humans learn how to kill Titans?
9
Who was the other person the colossal titan ate?
2
Is there another wall encompassing the entire of Paradis for Marley to use?
5
Is “Attack on Titan” taking place in the past or in the future?
0
Subjects of Ymir and pure titans
5
How can a Pure Titans recover the full body after extended period?
1
What was the purpose of turning Eldians into titans in the anime season 2?