What is the meaning behind Tsukihi's pose 17 minutes into in episode 1 of Tsukimonogatari?

When Tsukihi is taking a bath together with Koyomi, she played with the foam and struck a pose while saying [都条例]【とじょうれい】 (or so I think, based on the translation). Koyomi said it was scary and splashed some water on Tsukihi to wash all the soap away.

Below is the image of the relevant scene (NSFW): 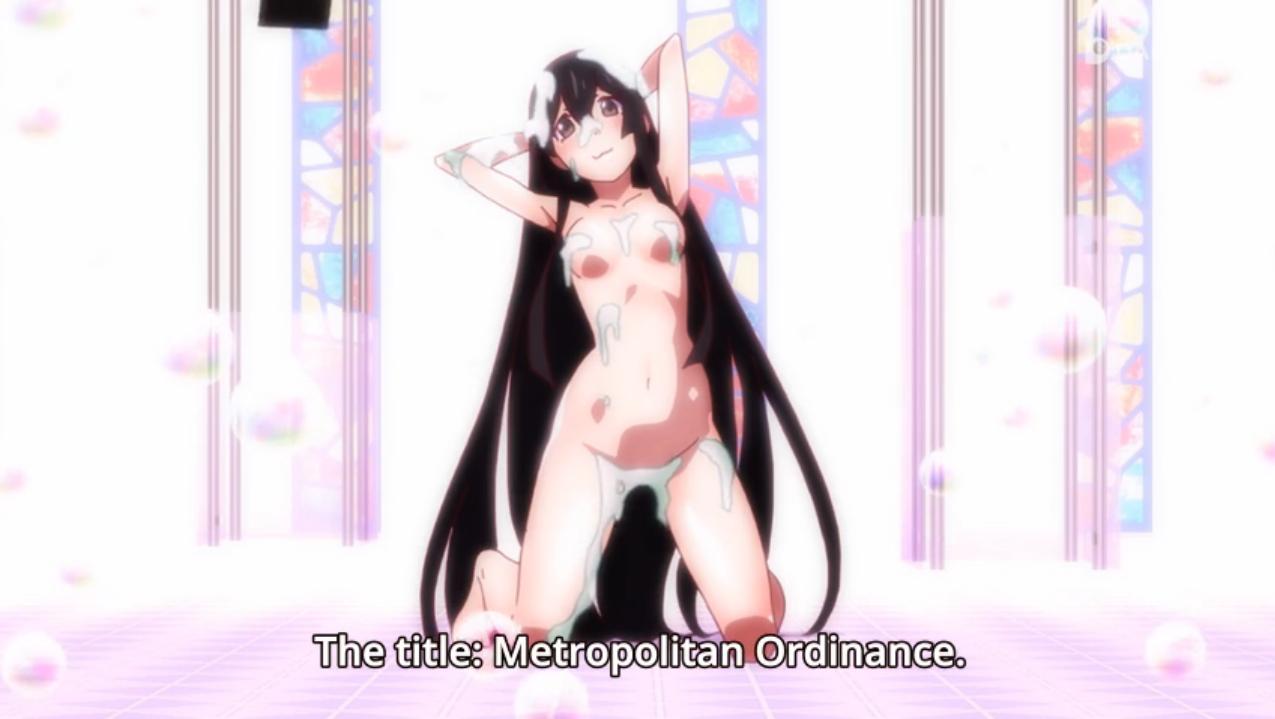 What is the meaning of Tsukihi's pose here? And why did Koyomi freak out like that?

Yeah, what Tsukihi said was 都条例 tojourei, which is the short name of the "Tokyo Metropolitan Ordinance Regarding the Healthy Development of Youths" (also called "Bill 156"). This ordinance underwent a major revision in 2010 that substantially expanded its scope. In particular, it required publishers located in Tokyo Metropolis to self-regulate and prevent the publication of "manga, anime, and other images (except for real-life photography)" that "unjustifiably glorify or exaggerate" certain sexual or pseudo sexual acts.

This bill was obviously targeted at the anime/manga/etc. industry (given the exemption for real-life photography). And, of course, the industry (which is largely based in Tokyo) was not a fan of this - this ordinance has been a hot-button topic for some time now. I'm pretty sure that the whole ending of the Kenzen Robo Daimidaler anime was a reaction to it.

In practice, the law has not been very strongly enforced. As of mid-2012, no works had been actually deemed "harmful", though I believe a small number (single digits) were deemed "harmful" in 2013. But anyway:

What is the meaning of Tsukihi's pose here?

Glorifying a pseudo-sexual act, I guess. The pose isn't a reference to anything in particular; the only previous examples of it I was able to find were a few things on pixiv (one, two; NSFW) doing drawings based on the description in the light novel (chapter 004; keep in mind that the light novel was written in Sept 2012, nearly two years after the revised ordinance was passed). More generally, this is a pretty prototypical example of the kind of thing that could have been subject to scrutiny or outright banned had the "non-existent youths" provision of the bill gone through.

Well, here is his internal monologue immediately after Tsukihi does her pose:

Don't poke fun at it!

Panicking, I dumped the washbowl on her. The soap was washed away. I think that made it worse, at least as far as the Metropolitan Ordinance is concerned. But still, I was of the opinion that covering up bits and pieces was far less wholesome.

Nudity is healthful and artistic.

I don't really know what to extract from that. Perhaps he was breaking the fourth wall and was worried that the government's censors would shut them down?

I don't understand Japanese and relevant part of light novel is not translated, so I'm assuming that the anime translations is correct.

Tokyo Metropolitan Ordinance Regarding the Healthy Development of Youths is a prefectural law, that simply says that any material, which is "considered harmful" must be marked as so (adult-only or 18+) and can only be placed in adult-only sections of stores. In 2010, the "considered harmful" was supposed to be expanded with "sexually provocative depictions of fictional characters who appear to be under 18 years of age"(aka. "Nonexistent youth" bill), but was never passed due to heavy opposition from industry.

The meta-joke here is that Tsukihi is both canonically and visually under age of 18, is striking suggestive pose and her privates are barely covered. Araragi is scared, because if said bill was actually in effect, it would immediately make the episode into 18+ material and would be handled as any kind of pornography. And thats something Araragi obviously wouldn't want. This is less obvious in anime, but it would definitely feel like real meta-joke when in written form. And considering NisiOisiN's streak with meta-4th wall breaking naratives, I wouldn't be surprised he written this exactly to make life of animators harder.