What are the translation of these two tanzaku in Date A Live II OVA?

In this scene in the OVA episode of Date A Live Season 2, the main setting is what appears to be a Tanabata Festival.

In this first picture, Kotori was writing a wish on her tanzaku but as Tohka questioned her about it, she then entered tsundere mode. Before she managed to erase her original wish and replace it with a plain "I hope Shidou becomes useful.", the video shows her original wish for a few milliseconds, but there are no subtitles for it. (I'm sorry if the first character was already scratched out, but it was already very difficult to capture this image). 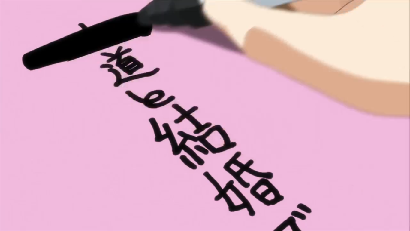 We also see Kurumi wrote her own wish in a tanzaku, but it isn't shown until much later in the episode. The second picture shows her wish as Shidou tied it to the topmost of a bamboo tree, again without subs. 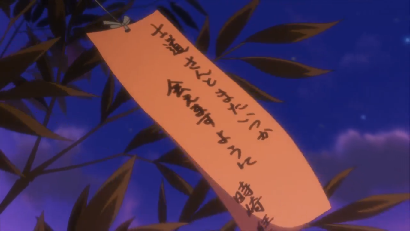 What did these two girls write in their wishes?

Initially, Kotori wrote in her tanzaku

I don't know what lies beyond the cut off part, but it can be inferred that she wants to get married (結婚) with Shidou.

As for Kurumi's tanzaku, it reads

I hope to meet Shidou-san again some day.

If you are wondering, the last 3 characters on the bottom left corner is her name [時崎]{ときさき} 狂{くるみ} (Tokisaki Kurumi).

Not the answer you're looking for? Browse other questions tagged japanese-language date-a-live or ask your own question.

6
What is the text before the OP in Date a Live episode 9 talking about?
1
What is a more accurate translation of the title of Legend of the Galactic Heroes?
11
What is the significance of the lottery box in Yuru Yuri Nachuyachumi! OVA? And why are some of the words crossed out?
6
What is the Japanese word they are talking about?
11
What are the “Angels” called in the original Japanese version?
3
How much did Date A Live anime cover the Light Novel?
0
What kind of luck are Hanako and Botan getting in the opening?
2
What are the markings used above some song lyrics?
2
What are the poltergeists whispering in Episode 11?