I am watching Cowboy Bebop right now. It seems it depicts a lot of smoking. Most of the characters smoke in that anime. So is there any kind of special meaning of that smoking?

Check out the TVTropes article called "Smoking is cool" where Spike is featured as the cool smoker. 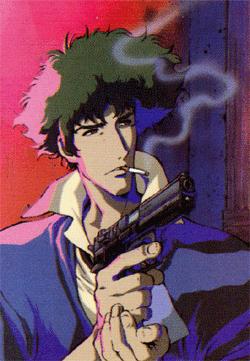 There's no denying that nine times out of ten a fictional smoker is a Badass.

We've kinda gotten used to that fact. Cowbow Bebop, among many, many other works, uses smoking to show that the character is likely not a person you want to mess with. Otherwise, you'll have a bad time, like those bandits and criminals Spike and his fellow crew members hunt for government bounties. In addition to Spike, Jet and Fey also smoke, but not as much. Guess the coolest guys smoke the most. There's even a running gag with Spike trying to light up a cig and being told he's in a non-smoking area.

There is a TV show called Big Shot that the crew of Bebop likes to watch for the news about biggest bounties. The show has wild west decorations and features desert background, guns, cactuses, tumbleweeds, a saloon door, everything that says "this is Wild West". And of course the image of that cannot be full without some smoking cowboys, which our bounty hunters represent.

Aside from all that, the series was produced in the end of the 90's when smoking was still considered kinda cool, although not as much as before. If you look for anime produced around the same time you'll surely find some other examples where main characters are both cool and smokers. Like for example Hellsing where Integra smokes cogarillos and is a scary-powerful sir. Trigun, for the most part set in a desert, where Wolfwood lights up a lot.

So this smoking thing isn't at all unique to Cowboy Bebop and doesn't have any sophisticated reasons beyond the fact that it is generally regarded as a sign that the smoking character is a badass.

I just want to throw it out there that Cowboy Bebop doesn't just use cigarettes as a 'coolness indicator.' There is a lot of really clever uses of cigarettes in the show. For example in the first episode a cigarette is used to show the passage of time that Spike was unconcious after being choked by Azimov. In a later episode they are used to showcase spikes ability to swallow and regurgitate things, which he then uses on the poker chip. Jet uses a cigarette to plant a listening device on the higher ups when tracking Chessmaster Hex. There are plenty more examples, really cool stuff in my opinion.

12
What is the connection between the Cowboy Bebop anime and the movie?
6
When does the Cowboy Bebop Manga take place within the Anime?
6
What game are António, Carlos and Jobim playing?
14
What is the text in the intro of Cowboy Bebop
15
What's up with the gravity on board of Bebop?
3
Could the Cowboy Bebop movie be set a few years after the series?
2
Why was Spike looking for beans in “Cowboy Bebop: The Movie”?
0
Music Cowboy bebop
0
Music in episode 10 of cowboy Bebop