What is spinning a girl in yukata like a top a reference to? 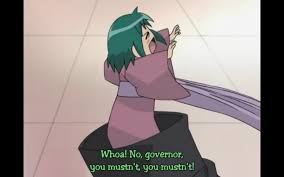 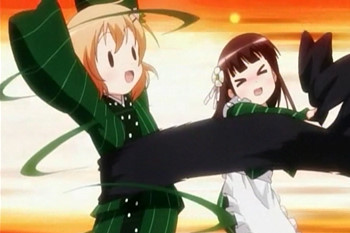 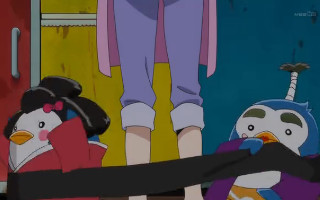 From left to right, top to bottom: Nisemonogatari, Midori no Hibi, Is the Order a Rabbit? and Mawaru-Penguindrum.

In the case of Midori no Hibi, why is Midori calling Seiji "governor"? Is this a reference to something?

The name of this meme is Obi spin, from the Japanese term 帯回し obi-mawashi.

An old jidaigeki-related meme wherein someone (usually a middle-aged man) pulls on the obi of a young woman wearing a kimono, causing her to spin around as it unravels. Usually accompanied by the tugger saying "It's fine, isn't it? (よいではないか、よいではないか)" in a sexually suggestive tone, while the young woman says "ohhh myyyy~! (あ～れ～)" as she spins.

This is, of course, an inherently voluntary game the two are playing, as simply putting her arms down would stop the young woman's obi from unraveling.

In the samurai movies and TV shows, the tugger is usually an 悪代官 aku-daikan, an evil governor, hence Midori's addressing Seiji as "governor". There is even a whole series of video games based on the premise, conveniently named Akudaikan.

TVTropes has more to say (and more examples) about this meme:

A little-known gesture of implied rape in Japanese culture involves the Shogun grabbing the waistband of his consort and ripping it off so hard that she spins several circles and falls on the bed with her clothes splayed open.

In some rare cases, the obi spinning is done to a male. 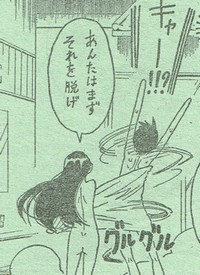 While this guy calls the obi spin an "ozashiki-asobi technique", I am not too sure if he meant it as a satire or a deformation of a Geisha entertainment activity. Obi spin is even featured in shows by the famous comedian Ken Shimura. 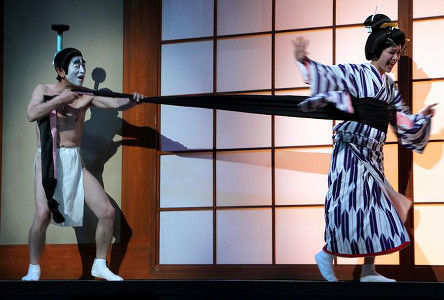 12
Is there an official Otaku day?
7
Why do Aya and Youko consider going to a ramen shop alone so amazing?
15
Why is there so much reluctant sex in hentai?
22
Why is it that many anime and manga depict being a virgin male as something embarrassing?
8
Before the era of Naruto, One Piece and Bleach being published simultaneously, was there ever another well-defined “Holy Trinity” of Manga?
8
What is that “Oh yeah!” gesture that anime characters do called?
7
What or who is “Minami” in “Search for Minami”?
4
What is the so-called “GUDAGUDA ship” involving Oda Nobunaga and Okita Souji?
3
Why do Mio and her friends seem to all wear different uniforms?
7
Why do females always run like this?