What does Touma say to the "Replica" Sorcerer with the Obsidian Blade?

At the end of A Certain Magical Index I episode 18, the "Replica" Sorcerer (the one with the Obsidian Blade) asks Touma to make sure he protects Misaka. When Touma answers, we can only see his lips moving (no sound) and then he smiles.

Misaka is listening from behind one of the iron beams of course. Normally in anime, it is fairly clear to me what these moments signify, but in this case, both the Sorcerer's and Misaka's responses are (in my opinion) ambiguous.

What does he say?

“I have promised to protect Mikoto and her around.”

When Touma helped Kuroko, he said so, in Volume 8 of the original novel. And perhaps in Volume 11 of the manga. 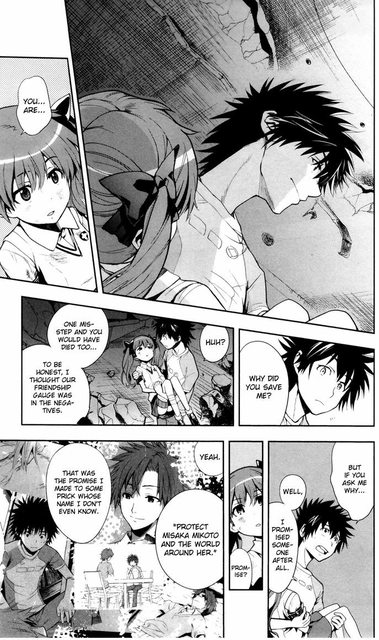 The full quote was:

"That’s right, it's a promise. This promise is to protect Misaka Mikoto and the world around her. This is my agreement with a certain nameless person who fell in love with her so quickly."

He explains this to Shirai Kuroko regarding his promise with Etzali from Toaru Majutsu no Index light novel volume 08.

I haven't been able to find a satisfying answer explaining Etzali's and Misaka's reactions yet, so...

Whatever he said, it obviously confirmed the promise Etzali asked for, but it wasn't what he had wanted to hear.

Combined with Misaka's reaction, I have two theories. I'll start with the one that's less likely:

In A Certain Magical Index II episode 23, Kamijo says to Kazakiri that he'd rather chop his hand off than lose one of his friends. I am mentioning this because it shows that he would make a statement essentially comparing the value of body parts and people, even though it specifically makes sense in that context because his right hand can literally kill Kazikiri.

The idea is that maybe he said something along the lines of "I'll protect her like my right hand" or "I'd chop off my right hand for her".

Luckily, there is evidence to contradict it. Here is the excerpt from the light novel, copied from Reddit:

Mikoto and the boy were the only ones in the alley.

The words that had come out of his mouth shook her more than she let on. But what rocked her very core—that she did not realize. Nevertheless, she unconsciously understood that she’d be better off not letting it show. Or rather, she possessed a compelling force telling her that she mustn’t do so.

However, without care, it would erupt within her. She was desperately holding it back, like a raging vortex of steam trying to escape her body.

She didn’t want to let it show on the surface, but she felt pained trying to hold it back.

Would that not mean that deep down she wanted to let it show? But that wasn’t the case.

Just thinking about letting it show nearly made her red in the face.

And she didn’t even know what the essential thing was.

She held everything in her throat, not understanding why.

One way or another, she’d realized it.

Mikoto had always kind of thought she was a unique existence. She had thought that even her distance to this boy had shrunken just a little bit compared to everyone else. Like if he was browsing a list of a thousand names and saw the name Misaka, he’d at least stop for a moment.

And that fact by itself had a big effect on her. She didn’t even understand why something as insignificant as this had caused her so much damage, so she of course couldn’t think of a way to deal with it. She wanted to run away right now if she could—from this unidentified pain.

She didn’t want to turn tail and run away from him.

It would hurt him.

The pain would be much more than what she was feeling now.

In my opinion, the marked part sums up the meaning behind her reaction. She realizes that to him, she's more or less just another person.

This makes me think that he said something along the lines of "I'll protect her like everyone else" or "I will protect everybody I can".

The idea is that this would be the worst possible answer because Etzali wanted him to commit specifically to protecting Misaka, but it still gives the promise because it includes him protecting her.

Now, in the anime, Misaka also says that she is taking what he said the wrong way and that he made it very misleading. The idea with that is that Kamijo is the kind of guy who protects people wherever he can, but this doesn't actually mean he cares about everyone equally. He still likes some people more than others, but he protects everyone.

It should also be noted that, in the light novel, he actually realized Misaka was close because he is so unlucky that he wouldn't have survived otherwise:

A steel girder had fallen into the ground right between his legs as he sat on his butt. That wasn’t all. All around him, more of them were sticking out of the ground, covering them up, like a badly made hut with tons of holes in the roof. There was a precarious balance here that seemed so weak a breeze would cause the whole thing to come crashing down, but for now, at least, Kamijou hadn’t been buried alive.

(That was lucky…wait, that’s impossible. I’m unlucky, after all. Which means…oh, I see. That Level 5 can use the power of electricity to manipulate magnetism, too, can’t she?)

However, this doesn't seem to affect what he says to Etzali at all, he either didn't think about it much or simply didn't care if Misaka heard his answer in the way he gave it. I do feel like this is in line with his character.

3
What does Accelerator say to Dark Matter at the end of their fight?