What is the context of this Hunter x Hunter reference in Inou Battle manga chapter 2?

In chapter 2 of Inou Battle wa Nichijou-kei no Naka de manga adaptation, we can see that the middle panel makes a reference to Dragon Ball's meme "It's over 9000!". The line was actually "It's over 8000!" in the original Japanese manga, and this explains why Andou only counts up to 8000. The censored word is Scouter, which is the device to measure power level. 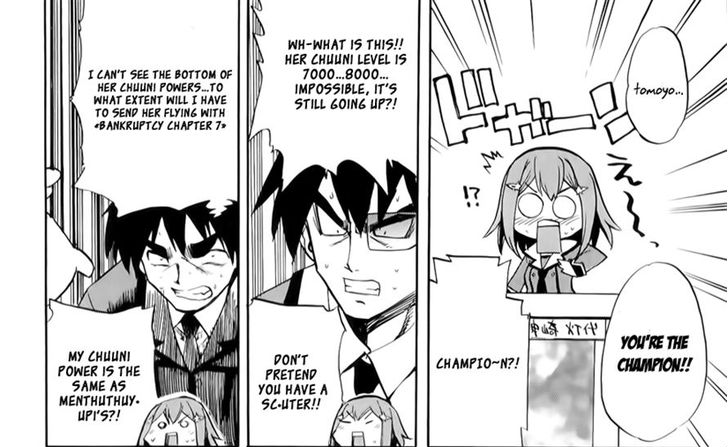 Which scene from Hunter x Hunter does this reference come from? And what is the context that makes it worth referenced by another author?

The first reference, "Bankruptcy Chapter 7," is referring to one of Knuckle's abilities. Doing so, he lends his opponent some of his nen, but while they use it, they are charged "interest" on it, meaning they have to repay that much nen back to him.[1]

The reference here is that the male character is wondering how long it would take for Bankruptcy Chapter 7 to completely "bankrupt" her chuuni powers from her.

This is explicitly seen in a fight between Knuckle and Youpi (for short), during which Knuckle uses this ability on Youpi. It is revealed that Youpi has excessively high levels of nen. Knuckle states, comparing Youpi to the "boss" (Morel)[2]:

This is reinforced by a quote on the Wiki:

Menthuthuyoupi is an Enhancer. Knuckle estimates the size of Menthuthuyoupi's aura to be at least 10 times greater than Morel's, or at least 700,000.

The reference here is just made to compare the scathingly high levels of Youpi's aura and drives home that her chuuni power is supposedly... over 700,000.

In addition to what @Killua said (being a hunter himself, he knows better!), there's possibly another reference from the Hunter x Hunter manga.

When I saw this question, I immediately remembered the panel below. In it, Shaiapouf (aka Pouf, the guy in the left side of the panel) is complaining that he and Menthuthuyoupi (aka Youpi, the muscular one in the right side of the panel) have the "same level of thinking". Pouf has a more complex (and supposedly more rational) way of thinking, while Youpi is a simple-minded guy.

So, in both panels there's a comparison of some ability involving Menthuthuyoupi's level on it, to the shock of the one compared with him. This is not the unique reference to a Hunter x Hunter specific scene in this manga.

See the spoilers below for the context of their conversation:

The "Majesty" in question is Meruem, King of the Chimera Ants, who are supposed to rule over the world as the most powerful being in existence. The King has three Royal Guards, including Youpi and Pouf, and they were breed to protect and help him.

However, Meruem becomes attached to a weak human woman, Komugi (the "she" in the panel), a champion player of a board game called Gumgi - and the "perfect" King was not able to defeat her in the game. Pouf, who are fanatically devoted to the King as an ideal of perfection and supreme power, thinks that Komugi is making Meruem doubt that ideal, so, after much thought, he concludes that she needs to die. While talking with other guards about the question, Youpi simply spoke, without much thought, the same conclusion that Pouf arrived.

29
Has the "It's over 9000!" meme spread back to Japan?
2
What is the context of this reference to Chrollo Lucilfer in Inou Battle manga chapter 1?