What does Kurome say in AkaKill Theater Ep. 22?

I was watching the Akame ga Kill ONAs, and in AkaKill Theater episode 22, Kurome is constantly pointing out that Akame doesn't get enough air-time even though the series is named after her and talking smack to her.

She then says something starting with Ba-, and is immediately censored. The dialogue goes something like this:

Run: We're just about out of time, so let's at least have a good-

Everyone is stunned, the display in the back says "She actually said it!"

Run: So I think, that's enough for today 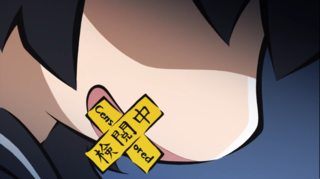 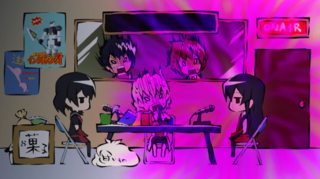 So what does she say?

According to this answer, Kurome most likely said something along the lines of "Sis, you are just like Bakabon" or "Sis, have you heard of Bakabon?" given the context.

Tensai Bakabon is another show named after someone who, like Akame, didn't have anywhere near enough screen time for a title character, as it is

Bakabon's troublemaker father who eventually steals the show and becomes the central character.

So essentially, Kurome is just mocking Akame for the fact that she was upstaged by a supporting character (Kurome herself), for the third time.

Not the answer you're looking for? Browse other questions tagged akame-ga-kill .

18
What does 'Akame ga Kill' mean and why is it called that?

5
What would have happened if Esdeath hadn't drunk all the demon extract?
21
What are the differences between the Akame Ga Kill! manga and anime?
18
What does 'Akame ga Kill' mean and why is it called that?
6
What was Incursio's trump card ability?
10
Does Mine die in Akame ga Kill! manga?
7
What language is the song "Fallen Heroes" in Akame ga Kill?
0
When to watch Akakill Theater?
1
Where does the figure that Esdeath killed 400,000 Northerners by burying them alive come from?