What does 'Akame ga Kill' mean and why is it called that?

Just what the title says, why is the show called Akame ga Kill! and what does it even mean? Akame was just an ordinary member of Night Raid, yet the show is named after her. She wasn't the main Protagonist, she wasn't even the main Waifu! And as this unanswered question mentions here, the only difference was:

She fought Esdeath, the primary antagonist, and ultimately survived.

I googled a bit and came across this link, according to which Akame ga Kill! literally means:

So what does that even mean? Does it mean that Akame is Death itself, or Akame is Dead (Not physically, but mentally - that she is dead inside). But I doubt that either of these interpretations are correct since she acts all cutesy from time to time.

As another user points out, a general translation would be Akame Kills, but that would be a very stupid name, wouldn't it? So can anyone help clear this up? 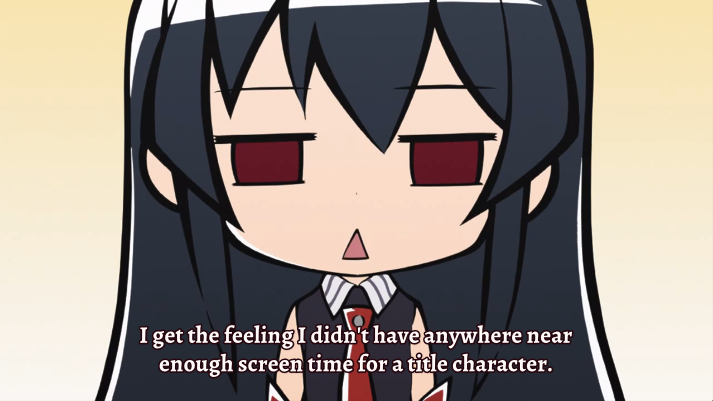 To reiterate, アカメが斬る (Akame ga Kiru) means "Akame cuts/slices/kills". Kiru also has another meaning: "to perform surgical incision", though the kanji is 切る in the case of this definition. This aligns well with the settings of the series: the goal of Akame and her group is to perform the necessary surgery on the corrupted empire by eliminating the tumors.

What is missing in the title are the objects, the targets that Akame kills. In episode 1, Tatsumi said 「俺が斬る」 (Ore ga Kiru), which means "let me kill (her)" or "I'll kill (her)". Even though there was no object specified, we could infer whom Tatsumi would kill. As for whom and what Akame kills, アカメが(Xを)斬る, the object X can be any of those in the chapter titles. Granted, it wasn't always Akame who did the killings, but she is actually a personification of Death (see explanation below) because her lethal and efficient one-cut-kill is befitting of Reaper's Scythe.

Does it mean that Akame is Death itself, or Akame is Dead (Not physically, but mentally - that she is dead inside).

Actually, that is my thought exactly. In episode 24,

Esdeath remarked that Akame is no longer human. It makes sense because Murasame's one-cut-kill doesn't work on non-human beings, or more precisely, beings without a beating heart, which is why Akame didn't die after cutting herself with it because she became Death. Also at the end, Akame said "I can only kill" because that is her newly acquired job as Death. Najenda and Akame, the only two survivors of Night Raid in the anime, actually symbolize Life and Death, as shown by them wearing capes of opposite colors and carrying out opposite roles of constructing and destroying for the new empire.

Akame was just an ordinary member of Night Raid, yet the show is named after her. She wasn't the main Protagonist, she wasn't even the main Waifu!

Princess Mononoke is also named after San who is not the main protagonist, even though Hayao Miyazaki had originally preferred the title The Legend of Ashitaka and even went as far as to create a new kanji for legend (sekki). Although Akame is not the main protagonist, like San, she is still indispensable to the plot, especially in a symbolic way.

Why not name the series Ore ga Kiru or Tatsumi ga Kiru? Well, because it wouldn't be as intriguing as Akame ga Kiru. The readers would get hooked on who is Akame and why does she have red eyes, the literal meaning of akame. (In Chinese, it so happens that there is a phrase 殺紅了眼 to describe a person who goes berserk from killing too many people that his eyes turn red.) It's red eyes and not black eyes because the story is full of the so-called "leftist" ideas, hence the oft regarded color of the left. Subjectivity aside, the ordering also matters: a is both the first letter in the English alphabet and the first character in Gojuuon, so Akame ga Kiru will pop up earlier in searches than the alternatives.

This is straightforward if you know Japanese. 斬る kiru is a verb meaning "to cut", with the specific nuance of "to kill with a blade". Which is what Akame does, which is why the show is named "Akame ga Kiru", which means "Akame cuts" or "Akame kills with a blade".

The English title "Akame ga Kill" is a fortuitous coincidence owing to the fact that the Japanese pronunciation of English "kill" is also kiru, and "kill" means more or less the same thing as 斬る kiru.

I googled a bit and came across this link, according to which Akame ga Kill! literally means: Akame is kill

No, that guy was wrong (or perhaps a master ruseman). There isn't any interpretation of the title under which it could mean "Akame is kill".

As another user points out, a general translation would be Akame Kills, but that would be a very stupid name, wouldn't it?

What's stupid about it? That's what the whole bloody story is about - Akame (and the rest of Night Raid) killing.

Now, as for why Akame specifically is the title character, that I don't know. But it is the case that she is the one most wont to killing with a blade (as opposed to, say, a gun or a fist or whatever). Would the title make as much sense if it were "Tatsumi cuts" / "Tatsumi kills with a blade"? No, because he doesn't do that all that much.

Given that they lampoon Akame's lack-of-main-character-ness in the show, I don't know that there's too much to read into this. Maybe she's the title character because the artist liked drawing her on the manga covers or something. It's not like the reason for her being the title character needs to be particularly deep.

According to Wikipedia, Akame ga Kill! translates to Red-Eye Kill!:

As you can see, the katakana for Akame is used rather than the hiragana since it's used for a character's name so it's describing her perfectly: she has red eyes.

As for the last part, kiru (斬る), while one could just pass it off as a crappy translation to English because it sounds like kill, it apparently does mean kill:

Kanji in this word

All of these definitions seem to point to a sword being used, which is what is depreciated on the cover of volume 1: 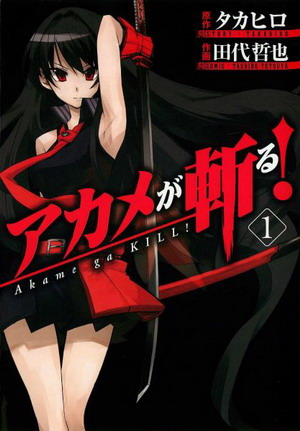 As for why that name, I haven't watched/read the series and can't answer, but I dare say your linked question here asking why she's the title character may explain that part (when it gets an answer), however I posted this answer (while incomplete) hoping that it would help someone complete the answer.

Well actually I wouldn't go so far as to relate this to some person she has killed or whatever. I rather think that the sentence Akame ga kill could loosly be translated to: Akame has killed. Following this thought, one could say, that it just means, all kills and bad things the Night Raid did were pinned on Akame, as Akame in episode 24 suggested. She could be the symbol for all sins commited by the Night Raid. Instead of making the title "The Night Raid has killed", the title reffers to the future and reflects the impression of the uninvolved people such as the villagers form the hometown who still think Tatsumi is alive, they aren't as informed as the soldiers oder the revolutionaries and so it would be possible to make them believe all crimes had been commited by the sole Akame.

Well thats how I interprete the title.

Akame ga Kill, is a dark thriller with a male protagonist, that being said, a lot of media regarding dark emotions doesn't have the main character's attributes in the title. The title references the theme, and is in third person from the protagonist's point of reference (They don't necessarily need to say the title out loud in the media).

In the title "Death becomes her" Bruce Willis is the protagonist, kinda dark. "She lives!" is about a cancer patient with the BF as the main character and he tries to make her life meaningful in the short time. These types of stories almost always have the main character identify with the titular character and at some point accept them for who they are.

"Akame Ga Kill" is the main Character's Tatsumi's statement at sometime in this series which ultimately came from his experiences living with a family of assassins; it also can reference to the point that his main inspiration kills/cuts/incises(as in surgery). Tatsumi has to redeem his friends as well as the innocents killed by the evil empire, Akame kills the evil empire, so killing the evil empire has become normal. It is to reference the main theme, and is a clever enough title to reference many themes in the story.

Simple. You say Akame isn't the main female character. To me she is. Maybe the mangaka felt about it like this as well but just didn't want to put too much attention on her either since Tatsumi is the main character overall. Think about it for a second. Akame gets the most in depth background story of all the female characters in the anime. She's by far the most interesting one as well. Also, the anime ends with her standing at the end dealing the final fight. Not Tatsumi. Not Mine. Not Sheele. Not Leo. No. Akame. So therefore, Akame ga Kill.

Not the answer you're looking for? Browse other questions tagged japanese-language akame-ga-kill or ask your own question.

12
Why is Akame the center of attention?
6
What does Kurome say in AkaKill Theater Ep. 22?

20
What are the differences between the Akame Ga Kill! manga and anime?
12
Why is Akame the center of attention?
11
Why didn't Akame die when she cut herself with Murasame?
6
What's the meaning of the title “B Gata H Kei”?
6
What does Kurome say in AkaKill Theater Ep. 22?
9
Does Mine die in Akame ga Kill! manga?
2
Was Akame ga Kill Zero stopped?
7
English, Hepburn, English, Hepburn, alternating in OP and ED. Why?
0
When to watch Akakill Theater?