What is the reference Kanbara made in episode 4 of Kyoukai no Kanata: Mini Theater special?

At 01:53 of episode 4 of Kyoukai no Kanata: Mini Theater special, after Hiroomi said that Mitsuki was his only idol, this conversation happened (transcribed to the best of my ability):

If my guesses are right, Kuriyama mistook MK5 (emu-kei-go) as abbreviation for Megamori (large serving) Kinpira1 Gobou2, which is a Japanese dish. 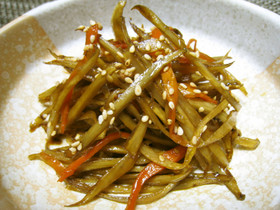 My question is about "MK5" in Kanbara's line. While the line can be generally understood as Mitsuki was getting pissed off at Hiroomi, I don't get what Kanbara is making a reference of by saying "MK5". Any idea?

"MK5" means "maji kireru 5 byoumae" (マジで切れる５秒前), or being on the verge of losing it (really pissed off).

Not the answer you're looking for? Browse other questions tagged japanese-language kyoukai-no-kanata or ask your own question.