This manga is about a high school girl who loves doing her sister's hair in the mornings, but she doesn't do her own hair because she thinks it won't suit her. One day at school, she cuts a guy's hair in the middle of class. Later she fixes it, and then the story progresses. That's all I can remember, thank you.

I'm quite sure it is Kyou, Koi o Hajimemasu. Your description matches the details from chapter 1 of the manga. 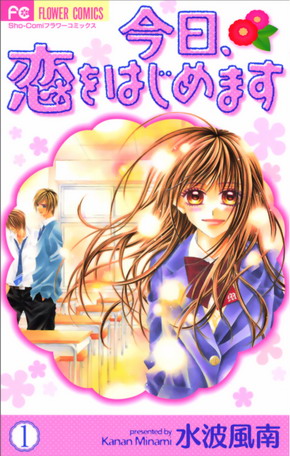 Synopsis from mangaupdates (emphasis mine):

Tsubaki is a girl who loves making her younger sister's hair pretty every morning, but she doesn't think that kind of style suits herself! The day of her High School Beginning Ceremony, after she failed in being the top student (who usually makes the ceremony speech), she finds herself sitting next to the actual top student of the first years, the worst rude guy ever, Kyouta. She ends up cutting his hair on purpose because of the bad things he says to her. Kyouta demands that Tsubaki pay him back with her body, but Tsubaki fixes his hair instead--making it even shorter! After that, Kyouta unexpectedly kisses Tsubaki and swears that he'll make her his woman.

Not the answer you're looking for? Browse other questions tagged kyou-koi-wo-hajimemasu or ask your own question.