Why is Aomine so dark-skinned? 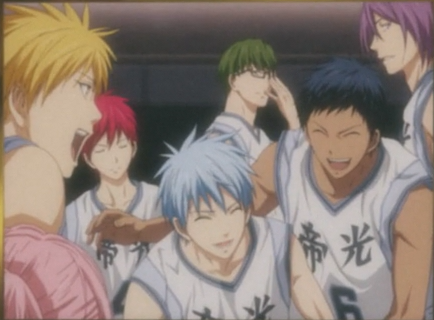 As you can see above, Aomine is awfully dark-skinned compared to all the other Japanese characters in Kuroko no Basuke. Why is that?

Black people have different shades of skin color. So it doesn't have to be to look Japanese. Taiga too played a lot outside but he doesn't have the same skin color which means that Aomine is naturally dark colored.

Apparently the author wanted a "black" character in the story as a stereotype of being the "best basketball player" but still wanted him to be Japanese, so he is a little lighter than Papa who is African. Another Black Japanese guy is Nebuya on the Rakuzan team who is the same color as Aomine. The reason they aren’t as dark as Papa is because they’re dark-skinned Japanese people while Papa is literally a black person.

Note if you look at the official colored manga for Aomine, Nebuya and Papa they're relatively similarly as dark. Granted papa is still the darkest but not by much.

4
Where did Kagami Taiga live when he lived in the US?
4
In Kuroko no Basuke, are the characters ever compared to professional players?
2
Did Midorima forget to bring his lucky charm in the Winter Preliminaries?
3
Why is Taiga afraid of dogs?
5
Why does the Teiko basketball club have over 100 members?
4
Why does Midorima's nails influence his shots?
6
Did Kiyoshi have an injured knee even before being seriously injured by Kirisaki Daīchi High?
3
What are the differences between the two personalities of Seijūrō Akashi?
6
Why weren't Kise and Midorima able to get in the Zone?