What is the name of this manga involving spirits? [closed]

The main character was a boy who could see spirits, which he eventually got used to seeing them around him. Apparently, his grandmother used to teach him how to exorcise spirits, but his memory was wiped at some point after that.

Anyhow, their family was supposedly responsible for protecting these cracks in the ground which led to the spirit world, and after his grandma died, he had to protect it instead. Oh, but because he didn't remember any spells, the protectors of the other cracks into the spirit world (at other places) came to his house to hold a meeting of some sort.

In the manga, there's also a pair of siblings who used weasels to fight or something..., or maybe those were their spirit animals... I don't quite remember.

Does anyone know the name of this manga? I'd greatly appreciate it if anyone does :)

Narukami Tasuku isn't just an average high schooler. He can see ghosts and demons, even though he doesn't want to. One day he was involved in an incident and found out that his family were totsugamimori, ones who protect the totsugamizuka. He is the only one remaining in his family and now, as a heir of totsugamimori, he was dragged into that world... 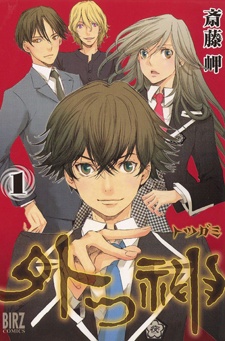 The siblings fighting with spirit weasels are: Takaomi Kozuka and his family.

Not the answer you're looking for? Browse other questions tagged totsugami or ask your own question.