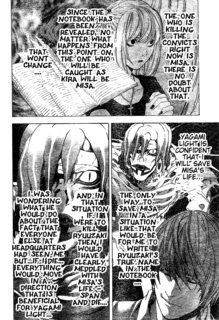 5
What was the intent for making Rem sacrifice herself for Misa?
2
Why didn’t Misa kill L the second time she got shinigami eyes?

21
Couldn't Misa have told Kira L's life span?
4
How did Light knew that L will cause Misa's death?
20
Is Misa Amane's early death a plothole in Death Note?
5
Why was Ryuk tied to Light's Death Note?
9
Is someone who wrote his name in the Death Note allowed to make the eye deal?
3
How can a death note shorten the lifespan of others?
14
Is Ryuk required to write Misa's name in his Death Note at the end of her life?
4
Why didn’t Rem die when she killed the criminal to save misa when she was in higuchi’s car?
7
Why didn't Rem tell L's name to Light or Misa?
2
Why didn’t Misa kill L the second time she got shinigami eyes?