I don´t know what genre this anime would fit best, but whatever. The anime I´m searching for is about a guy who leaves his village with 2 friends, another guy and a girl. They get separated and he searches for them. After a while the guy ends up in a town without money and decides to sleep on the street. 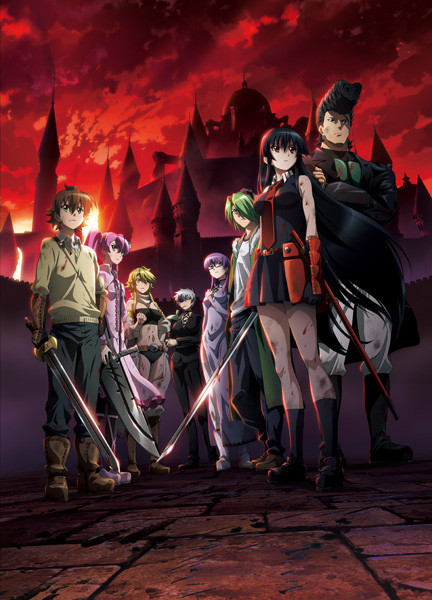 Tatsumi is a self-acknowledge country bumpkin who is nonetheless a well trained fighter. He and two companions leave their remote village to head to the Imperial City to find a way to relieve their friends and family from ruinous taxation imposed by the authorities. Yet the Imperial City is filled with unimaginable amounts of corruption and evil from supernatural sources. Tatsumi is immediately swindled after reaching the City and nearly loses everything soon after, but finds himself allied with an unlikely group of assassins.

Your description matches the plot summary from Wikipedia quite well (emphasis mine):

Tatsumi is a fighter who, accompanied by his two childhood friends, sets off to the Capital in search of a way to make money to assist his poverty-stricken village. After being separated from his friends, Tatsumi not only fails to enlist in the army, but is swindled out of all his money. He is then taken in by a noble family who offer him help, but intend to torture and kill him, just like they did with his friends and dozens of other people. Tatsumi is rescued by a group of assassins known as Night Raid, and is invited to join their ranks.

I haven't seen the series myself, but this seems to match most of your points, particularly Episode 1 of the anime.

Tatsumi heads for the capital despite warnings about the area's dark nature as he needs to raise money for his village. Shortly after arriving, Tatsumi is robbed by a woman and has to sleep in the streets. However, he is invited to the manor of a young rich girl named Aria, who takes pity on him. As he waits for his best friends, Sayo and Ieyasu, to arrive in the capital, Tatsumi learns of an assassin group named Night Raid, whose members are wanted for numerous murders. One night, the group appears and starts killing Aria's guards and her parents. Tatsumi faces off against Night Raid member Akame, but their duel is interrupted by Leone, the same woman who robbed him; she reveals to Tatsumi that Aria and her parents has tortured several people from the countryside, including Ieyasu and Sayo, the latter already being dead. Tatsumi kills Aria just before Ieyasu dies and Leone, impressed with Tatsumi's ability to kill mercilessly, invites him to join Night Raid.

Not the answer you're looking for? Browse other questions tagged akame-ga-kill or ask your own question.