Is it possible for a genin to become a jonin?

In Naruto, by the end of Shippuden (ignoring the epilogue), neither Naruto nor Sasuke had ever passed the chunin exams. Given that the chunin exams seem to be held sporadically (two years between the ones in Naruto Part 1 and the ones being shown in the anime currently), it seems possible that other genin would end up in this situation. Is it possible for those genin to go directly to being jonin, or do they have to wait for possibly dozens of years (depending on how sporadically the chunin exams are held) to become a chunin first?

In the Road to Ninja movie, Naruto tried to get a recommendation from Iruka for promotion to Jōnin, but was refused. Iruka said that Naruto had to become a Chūnin before he could become a Jōnin.

Iruka: so, what did you want to talk about?

Naruto: Um, Iruka-sensei, uh, listen, you think you can submit a Jonin application for me?

Naruto: It's just that all of my other classmates are going to have their parents fill out applications for them, and, well, I, uh...

Naruto: But why not?

Iruka: Because that step is supposed to come after you become a chunin. Sure you saved us from Pain, and everyone calls you the "Hero of the Hidden Leaf", but I can't give you special treatment. I mean, even your Dad worked his way up through the ranks - from Genin, to Chunin, to Jonin, to become Hokage. Then he went on to became a Hero.

Naruto: hmm, to become just a face carved into a rock.

Update: In the Naruto Shippuden anime, Episode 413 - Hopes Entrusted to the Future shows that it is possible for a Genin to be promoted to Jōnin under special circumstances.

Lee, Tenten, and Negi did not complete the original requirements of the second Chūnin Exam. They returned with 2 "Heaven" scrolls instead of "Heaven" and "Earth" scrolls:

Lee: I can't reveal any details, but there were extraordinary circumstances that prevented us from collecting scrolls! Please ask Lord Kazekage!

Proctor: It doesn't matter what circumstances there were. No means no!

Gaara later rescinded that requirement when he cancelled the Third exam after he and Fū were attacked in an attempt to steal their tailed beasts:

Gaara: I'm sorry. I can't go into details, but this is a domestic matter within the Sand.

Shikamaru: Then how do we determine who passed the Chunin Exams?

Gaara: We've prepared detailed reports about each team's performance in the Second Exam. I'd like the respective villages to use them to decide whether their participants should be promoted to chunin.

[later, when addressing the exam participants...]

Gaara: Therefore, I deem the Third Exam unnecessary... Furthermore, I am rescinding part of the requirements for the Second Exam... For each of you standing here right now, a detailed report of your performance will be sent to your respective villages. Your Kage will make the final decision on your promotion.

Based on that report, Lady Tsunade "double-promotes" Negi to Jōnin:

Tsunade: I've gone over your Second Exam reports. And... Hinata, Shino, Kiba, Choji, Ino, and Sakura... You six passed with flying colors and are promoted to chunin!

Tsunade: [looking at Tenten, Negi, and Lee] Finally, although they did not collect two scrolls, they performed admirably... and are more than qualified for promotion. Lee and Tenten, you are now chunin.

Lee: Lady Tsunade! Team Guy is one for all, all for one! How can Neji not be included...?!

Tsunade: Just let me finish! Neji Hyuga is given a special double promotion to jonin! The Kazekage himself noted, "In particular, Neji's performance was most impressive and due consideration has been given in this report." He's already proven himself to be more than capable as a chunin.

First of all, it's not exactly known how a Chunin becomes Jonin.

From Jonin article on Naruto wiki:

The villagers may send their recommendations for a jōnin appointment. The Kage reads said recommendations and may consider appointing an individual a jōnin if his or her qualities are recognised as adequate by enough people and himself.

However, there was mention of a Jōnin Exam in the anime's Kurama Clan Arc.

But we don't know what the requirements for this exam are.

It also seems that the article/series doesn't mention anything about the general requirements for becoming a Jonin.

From the Jonin article, it is safe to assume that becoming a Jonin is matter of experience, reputation and most importantly, skill.

So, is it possible for a Genin to become Jonin? Yes. Provided:

But whether to become a Jonin also depends on personal beliefs of the person. As we can see from the Genin article:

Kosuke Maruboshi, who is called the Eternal Genin (万年下忍, Mannen Genin) has the skills of a jōnin-level shinobi, but is officially a genin — a rank he had consciously decided to remain at, due to personal reasons. He shares the epithet with Might Duy, who in his twenty years as a genin mastered the Eight Gates.

After the fourth great ninja war, Kakashi gives Naruto a giant stack of books to study and say that when he finishes those book then he can become a Jonin. 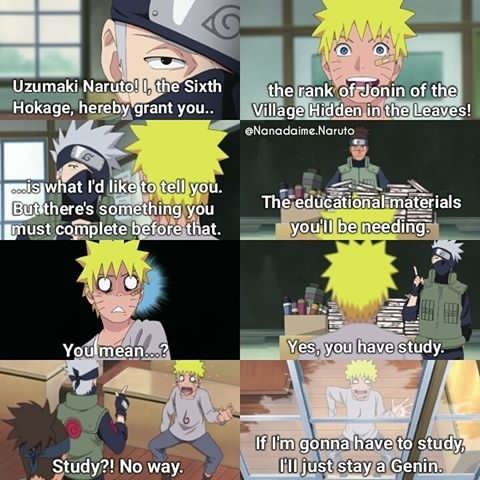 Yes, it is quite possible, but very unlikely. In the anime, during the arc of the second Naruto Shippuden Chunin Exams, it was revealed that Neji was directly granted the Jonin rank from Genin. However, this came under extraordinary circumstances, in which he led Tenten, Lee, Matsuri of Sunagakure, and two Genin of Takigakure to fight Hōichi of Sunagakure, who had captured Gaara and Fū, the Jinchūriki of the Seven-Tails.

Rank in the shinobi world is traditionally appointed by superiors based on skill, maturity and leadership ability. Prior to Tobirama's creation of the ninja academy, novices were given to a an experienced shinobi to train and s/he decided when they were ready to start taking missions (i.e. equivalent to genin) and all further rank was earned in the field.

Field promotion to chūnin, tokubetsu jōnin and even jōnin was still common during the third shinobi war.

In peacetime, field promotions became harder to attain, as there were fewer opportunities for shinobi to prove themselves in combat. The villages therefore created their own evaluations/exams for genin who had ben in the field for a while to assess whether they were ready for promotion.

Some time after the third great shinobi war, the joint chūnin exams were instituted to promote inter-village cooperation as well as to provide a spectacle to entertain the lords, attract customers and showcase the skills of the young ninja.

By the opening of the Naruto manga, most genin only attain chūnin rank through the semi-annual joint chūnin exams. Field promotion to chūnin is rare, though theoretically possible.

In contrast, promotion to tokubetsu jōnin and jōnin was still by appointment rather than examination (although the Kurama filler arc mentions a jōnin exam, this is not reflected in the manga canon) and can theoretically be given to any shinobi, even genin.

From what we see in the manga, promotion from genin straight to jōnin rarely happens in reality, though.

It isn't completely impossible, however, as there is mention of independent ninja and small clans joining a village and their ninja being assigned various ranks based on their skills and/or reputations.

In theory, the whole 4th shinobi war should have lead to many field promotions, but this didn't seem to happen, looking at the vrious flashbacks and stuff in Boruto, so yeah ...

yes, this was the case with shikamaru, who was promoted immediately to jonin after his fight against temari, even though he forfeited the fight because he ran out of chakra.

6
At the end, did Naruto skip Chunnin and Jounin rank before becoming Hokage?
4
How does one become a Jounin?