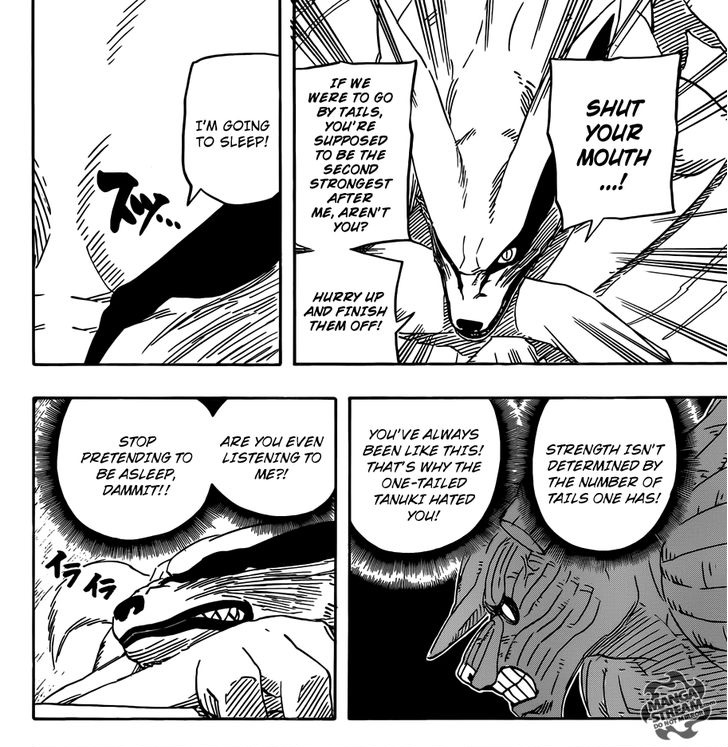 Comparison of tailed-beast power levels has not been explicitly stated in manga or anime. But following things have been mentioned in the manga:

Let the amount of chakra of a tailed-beast be denoted by 'x / [210-n]'; where x is all of the chakras, and n is the number of tails of the particular tailed-beast.

Based on that formula:

I would like to say that in the anime, in set 16, when Killer B took on Kisame, B only sprouts 6 chakra tails, and when Kisame won a small taijutsu contest, he sprouted 2 more tails, Kisame that B was taking him seriously.

Also if the tails are of chakra, then how could one have just as much chakra as 9-Tails? It could be that maybe 1-Tail is more concentrated than 9-Tails.

Also, before Shippuden, when Naruto would get more tails in the cloak, the higher the power. Also, the 9-Tails chakra cloak does damage to the environment, but the 1-Tail (according to the forums) does not.

Also, when Naruto goes into the 9-Tails chakra cloak, at 4-Tails it starts damaging him, but the 8-Tails chakra cloak does not do damage until all 8 are out (some of the info is from wiki so may or not be correct.

Also, another thing is that when Kisame would use Samehada to rip out B's chakra, the number of tails went down showing that there is a correlation in the number of the tails. Although most of this is speculation, if you look close, it seems like there are lots of small (and huge) hints.

For sure, there seem to be quite a few hints display but it is nowhere said outright that more tails = more power. By adding clues we can only assume but with all the clues given to us, we're probably right anyway.

12
Is the Nine Tails still stronger than the Eight Tails even though half of him was sealed away?
4
Why does Konoha have only 1 tailed beast?
5
How was the Ten Tails actually separated?