Why are the eyes in front of the hair?

In anime, strands of hair often disappear or stop short in front of the eyes. I've seen this often enough that maybe there's a reason or at least an origin of the pattern.

Why do the artists do this?

(Or do these anime characters actually have bangs?)

Since emotions are best expressed through the eyes, they are usually made visible even if the character has bangs or wear glasses. There are exceptions, when the author wants to give the character a mysterious aura, or to hide the character's emotion momentarily. However, the eyes are usually shown regardless when it is necessary to clearly portray the determination of the character.

Being able to see the eyes of a character is important - but why put the hair there in the first place? This is to distinguish characters from each other. Disallowing hair in front of the face limits the amount of hairstyles that can be used. Also, the characters generally face the camera, meaning that they need to be distinguishable from the front too. 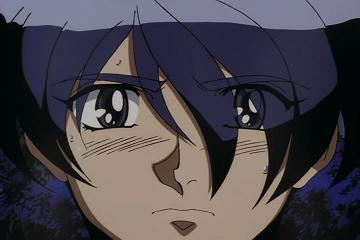 Generally, if the hair isn't completely obstructing the eye or eyebrows, it would be fine to leave out the detail on the eye, but it's become the norm in anime so animators probably don't think twice about doing it. It also saves having to worry about the eye looking odd when partially hidden.

In a forum post here, one user suggests an alternative way of drawing such cases, in which the hair gradually becomes translucent as it nears the eyes, so the characters expressions can be seen more naturally.

39
Why do many characters tend to have crazy hair colors and styles?
25
What is the origin of this facial expression with one's tongue sticking out?
25
Why are there sometimes darkened scenes in new anime?
18
What are the different colors in anime production drawings for?
5
Why is the childhood friend trope commonly seen in anime?
3
Why do anime end with spoilers?
2
What's with the fantasy hair?
3
How often do multi-season anime break their previous cour count?
5
Why are old anime women often depicted as young girls?
4
Is puking blood when punched in the gut a common trope in anime?