For example, when Kinkaku and Ginkaku are reincarnated, they have their ninja tools. It is also the case with the reincarnated Seven Ninja Swordsmen.

If this is so, suppose someone else had acquired one of the ninja tools, would there be two copies of the tool?

There can be only one copy of the tool at a time. The resurrected shinobi get their tools if they have not been acquired by others in the real world.

When the Seven legendary swordsmen were summoned, initially only Zabuza had his Kubikiribōchō. Although Suigetsu had acquired it, it was taken away from him when he was arrested at the five Kage meeting. Thus, it seems the Edo Tensei transferred it to Zabuza. 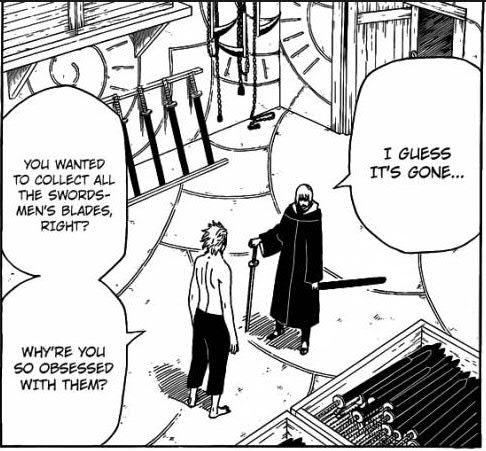 Later, Mangetsu summons 4 other swords from his scroll. He had presumably sealed them in his scroll before he died, which is probably why they were not acquired by others.

The only swords missing are the Samehada and Hiramekarei, which were in possession of Bee and Chojuro respectively. Similarly, Sasori did not get his puppets, because Kankuro had taken their possession.

Kinkaku and Ginkaku had the weapons sealed inside them, much like Orochimaru produces his sword from his mouth.

5
Can a reanimated Rinnegan user use the Outer Path to revive someone?

13
How is it that a Sharingan can work when it's been transplanted?
12
How was it possible to summon Sasori with Edo Tensei?
15
How could Madara free himself from the Impure World Resurrection technique, while Tobirama can't?
4
Is the amount of chakra extracted equal to the size of the part that is cut off from the Bijuu?
9
Why was the Sharingan's genjutsu ability not used much in the 4th Ninja War?
3
Can a ninja learn a jutsu that lies outside of their own alignment?
9
Discrepancies between Kishimoto and the Asura Path?
3
Why do the resurrected bodies disappear in the impure world resurrection jutsu?
1
What happened to the power of the tailed beast that was inside Naruto?
0
Can someone with activated (in use) Sharingan be pulled into a genjutsu by another person with activated Sharingan?