Action/Martial Arts anime with a character fighting with feathers [closed]

I believe the anime was in the 90's. Artwork looked similar to YuYu Hakusho. Action/Martial Arts anime. One thing that I remembered most about the opening theme was that there was a part where the wind blew past him and he disappered into the with like a ninja.

The main character is a funny guys who plays around too much. He is a great fighter, moves like the wind, and in the beginning of the anime he protects this girls from a group of thugs. He also had a friend who helped him and the girl escape from a bad guy.

His friend uses feathers as weapons. From what I can remember he had red, blue, and black feathers that he used. Some feathers that he threw could turn around like boomerangs. Eventually as the main character escapes with the girl (I think), his friend fights till then end and gets killed.

Hakuō Academy used to be a prestigious high school, and famous for martial arts. However, because its rival school Seishikan has been cowardly luring its superior students, Hakuō was going to decline. In order to recover from the situation, the acting principal of Hakuō; Himeko Hōjō, sends Ranko Yagyū to the Fūma village in search of the famous Fūma ninja clan for assistance. The leader of the Fūma sent Kojirō to Hakuō, there he faces the notorious Yasha clan who fights for Seishikan led by Musashi Asuka. Kojirō's comrades arrive, resuming an all-out ninja war that began five centuries ago.

There are two twins Kou and Shoryu, who fought with feathers (white, blue, red and black).

In episode 3, Kou fought with two guys, Byakko and Shien. After defeating Byakko, before Kou could deal the final blow to Byakko, he was interrupted and killed by Shien. However, before he died, he managed to kill Shien with a black feather. Byakko, who survived the fight, copied Kou's face by pressing his face to the ground, pouring a liquid in the hole and then immersing his own face into it. This is the scene where Kou fought with the feathers, and this is the moment when Byakko used his "copy ability".

There are 4 kind of feathers:

Later in the story, Shoryu would see through Byakko's disguise and fight with him to avenge his brother.

Below are pictures of Byakko and Kou. 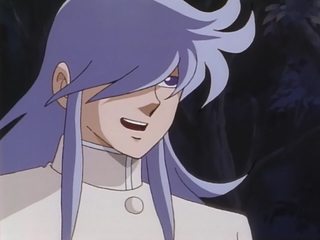 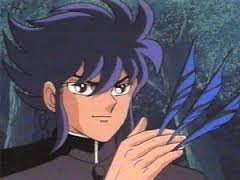 Not the answer you're looking for? Browse other questions tagged fuuma-no-kojirou .