Where is Eren's father Dr. Jaeger?

So I finally got around to seeing what the fuss was all about with Attack on Titan anime series, by marathoning it in two days, and I am glad I did. Do note that I just finish watching the anime series only, so if it's answered in the manga, please indicate spoilers.

The thing that stood out for me though was the complete absence of Eren's father after the first two episodes, and the fact that no one seemed in the least bit concerned. We know he was (probably) not dead, because in the second episode, he was seen riding back home concerned about whether his wife, Eren and Mikasa were safe. In Eren's memories, he also seemed to be aware of what was going to happen (or saw it as inevitable), so it seemed unlikely that he had been killed, particularly with no mention of it.

However, aside from some recurrences of Eren's dream/memory, there was no sign of his father at all, and nobody seemed to care. Eren and Mikasa didn't mention or even recognised the absence. And the various soldiers, generals, etc. didn't seem interested either, even though Eren made it clear that his father had something hidden in his basement, possibly related to his ability. I would have thought that someone would have interrogated him further on what his father was doing or what could be in the basement. All we seem to know is that he had been traveling somewhere for a week or so.

Is there an explanation as to where Dr. Jaeger was during the 5+ years? Is it just an oversight that Eren's father is so glossed over by the series? Seems kind of weird when he's potentially a crucial character in the same vein as Annie's father.

The whereabouts of Dr. Jaeger are revealed in chapter 62. To give you an idea how far ahead that is, the latest episode (25) plays out during chapter 33, so you are basically halfway through.

Eren has eaten his own father. This event happened somewhere during the time-skip of the second chapter, so Dr. Jaeger has basically been dead for most of the series. 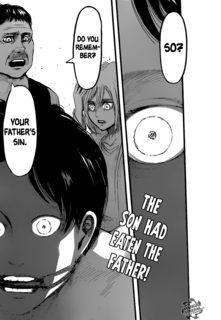 Unmarked spoilers because otherwise this whole A would be a yellow rectangle.

Dr. Jaeger is dead, he was eaten by Eren during his first titan transformation.

As of his remains, it should be somewhere, a pile of half-digested bones because titans (do not have digestive organs) vomit the remains of humans they eat (gross, sorry).

But do not feel sorry for the doctor , because he probably wanted to be eaten, in order to pass the progenitor titan powers to Eren.

just to finish the yellow block, progenitor titan power is passed by drinking the spinal fluid of the former holder, killing him in the process. You can also eat the person with the spinal fluid to the same effect.

Actually Dr. Jaeger is not THAT crucial by himself in person as much as being a plot device on Eren's background.

His role was giving Eren titan powers and putting whatever is inside the basement near wall maria there. Now that it is done, another scholar character can pick up from where he left.

You could also argue that since he probably knows too much about Titans, he would be a dealbreaker character if he was still alive, so taking his secrets to the grave (aside what is in the basement) protects the mysteries of the series. The same thing happened when they threw the king under the bus.

But there are still the wallist priests, I doubt they do not have a compendium of all the truth hidden somewhere. It was shown they are very good at taking their secrets to the grave, so it is not unthinkable they have the complete faq/walkthrough to their universe.

He (Dr. Jaeger) can come back through the basement content's (not back to life, but back to the story, in some flashback fashion).

What happened to Eren's dad is revealed in volume 62 of the manga. In the anime, though, Eren's dad is glossed over, but that's because he isn't Eren's main priority. Learning how to kill Titans is.

I would think he doesn't really want to think about his dad because there is a possibility that he may be dead! Having to deal with the pain of his mother dying is a lot for a little boy to deal with.

There are instances though when he is thinking about the basement that he asks himself why his dad just disappeared. So, the watcher is lead to believe that he is either dead or gone somewhere.

Of course, if you read the manga, you know what really happens.

39
What exactly happens to a Titan's body after it is killed?
7
What happened to Eren that made him unable to turn into a Titan in chapter 53 of the manga?
5
What's the secret behind Eren's key?
9
In Shingeki No Kyojin, when does Eren lose 3 years of his memory?
2
Why is Zeke interested in Eren?
14
Why did Eren survive getting eaten?
6
Is Eren Jaeger considered a Rogue Titan or an Attack Titan?
4
Why didn't Annie take Eren out of his Titan when she kicked and beat him in the head during their fight in Stohess?
4
If Eren Jaeger dies without transfering his titan powers, will both powers transfer to the same child?
1
Why didn't Marcel or Frieda Reiss transform when being eaten?