What is the significance of the lottery box in Yuru Yuri Nachuyachumi! OVA? And why are some of the words crossed out? 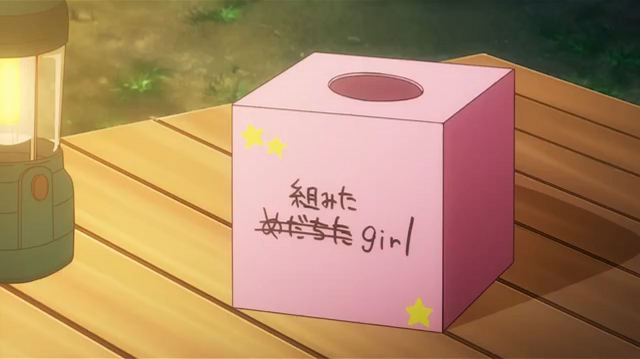 Searching for めだちた leads me to the dictionary entry for 【目{め}立{だ}ちたがり屋{や}】, which means "attention seeker". However, it feels a bit out of whack here.

What is the significance of this box? And why are the words crossed out?

I believe this is the same box that was used earlier in the series for drawing lots. It's a running joke that Kyouko kept on pulling out the box, crossing out what she originally wrote on it, and writing something new.

The first time, in Episode 1 of Series I, everyone put in things that Akari could do to try and stand out more as a main character, which is probably what "めだちた girl" refers to. The manga translation that I read translates the word as "star wannabe girl". Yui thinks that it sounds pretty horrible when she sees it, so it seems like that out of whack feeling was intentional; it was supposed to be Kyouko--intentionally, since she's always messing with Akari, or possibly unintentionally--using a term with the negative connotation that Akari was trying to draw attention to herself. 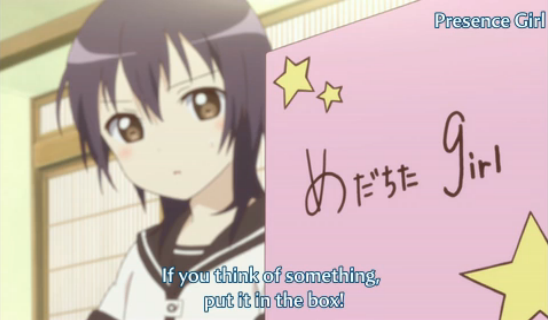 Another time, which seems to have only happened in the manga, Kyouko filled the box with conversational topics like "Club activities" and "I'm hungry" and penalties like "Say 'Shazam!' at the end of your sentences" and "Talk erotically". (Akari had to say "Shazam!", while Chinatsu had to talk erotically.) There were other instances across the manga and anime where Kyouko pulled out the box and wrote something new on it; being Kyouko, it wouldn't be too surprising if everything she wrote was some kind of pun on the original "めだちた girl".

At nhahtdh's request, here is a brief explanation of a Japanese pun that is happening here. It probably doesn't make much sense if you don't know Japanese, but oh well.

First, note that the box reads medachi-ta-girl, with the medachi-ta crossed out and replaced with kumi-ta.

This is a pun on the suffix -がる -garu (the one you attach to the -たい -tai form to express that someone else wants to do such-and-such), which sounds very much like ガール gaaru "girl". So, what we effectively have here is 目立ちたがる medachi-ta-garu "to want to stand out" being crossed out and replaced with 組みたがる kumi-ta-garu "to want to join together".

Perhaps the notion is that rather than being "girls who want to stand out", they are "girls who want to join together". I haven't gotten that far in Yuru Yuri, though, so I dunno what exactly the joke is; see Torisuda's answer for more information on that.

4
What are the translation of these two tanzaku in Date A Live II OVA?
0
What kind of luck are Hanako and Botan getting in the opening?
7
Are the items featured in Yuru Yuri San Hai! cross review based on real items?
2
What are the markings used above some song lyrics?
3
What is the meaning and significance of the word "Sunagimo Umataro" (砂肝うま太郎) in Yuyushiki?
9
Why are only some of the characters "color-coded"?
1
Why are Maki and Nobara surprised by Megumi's response that Panda smells like the sun ('ohisama')?