Are we ever going to be introduced to Ryou's downstairs neighbor?

As of episode 8 of Koufuku Graffiti, there's been at least one shot per episode in which Ryou's downstairs neighbor is briefly shown (usually standing on her balcony folding clothes or something). 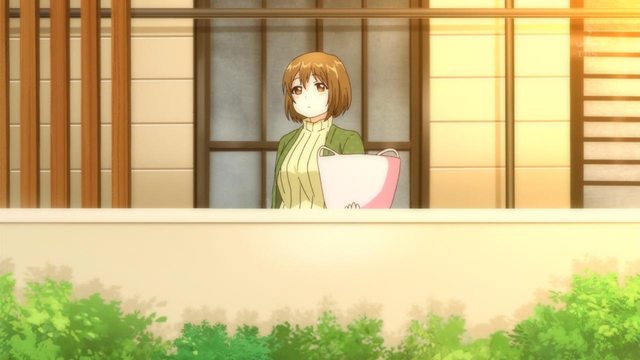 Is she ever going to be introduced as a character, or is she more just a running joke?

As mentioned by krazer in the comment, she is Yuki Uchiki. She is finally introduced in episode 10 Chewy, Melty. (Japanese title: Hamohamo, Michichi.) when Kirin eavesdropped on her phone conversation and accidentally fell (and safely landed) on her veranda.

In the anime, episode 10 happened around January (as the next episode happened in February, and the previous episode happened on New Year's Eve). At this time, Yuki was a graduating undergraduate student, while Ryou and Kirin were preparing for their high school entrance exam in March. According to her wiki page on nicovideo, she is going to work as a librarian at the same high school where Ryou and Kirin goes to.

Not the answer you're looking for? Browse other questions tagged koufuku-graffiti or ask your own question.