Why didn't Goku and Chi Chi use the Dragon Balls to rescue the Ox King and his castle?

At the end of Dragon Ball, when Goku and Chi Chi were questing to find the Bansho Fan to put out the fire trapping the Ox King, it seems as if they could have used the Dragon Balls to do it quickly. More than one year had passed since their previous usage and, as far as I could tell, the balls were not scattered after wishing Krillin and the others back to life (they remained on the ground at the Kame House after the wish).

So, it seems like they could have quickly made a wish to stop the flames and restore the castle. Why did they not do so? I did not read the manga, I only watched the anime. Was there a specific reason that either I missed, or that was perhaps stated in the manga, or was it simply a plot device to fill the last few episodes of the series?

Your assumption about the dragon balls was wrong. They did indeed scatter in chapter 156, right after Shenlon brought everyone back to life. Also seeing the mini saga about the wedding-dress was anime filler to begin with, one could argue that it would be pretty lame to fill it with the gang just using the dragon balls.

Apart from that, it should be noted that getting the dragon balls wasn't as easy as it sounds at that time. Bulma did have the dragon radar, but she would not have been able to retrieve them all on her own as we had seen earlier in the series. And Goku couldn't help her either as he had promised to train at the sanctuary with God for three years. He was stuck there all the way to the tournament.

So when the fire actually happened, it would take Goku less time to get the fan, than to collect all dragon balls. So trying to get the fan first, would be the best choice of action. If he would fail, they could collect the dragon balls as a backup plan anyway. 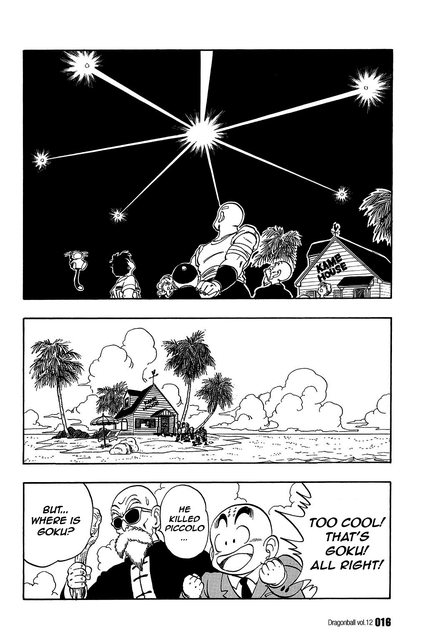 Not the answer you're looking for? Browse other questions tagged dragon-ball .

3
Why didn't Krillin and Gohan store the Dragon balls in a capsule?
3
Why couldn't Goku use the Nimbus to rescue the Ox King from the fire?
11
What does the Namekian password for the Dragon Balls translate to?
2
Why was the nudity not censored in Dragon Ball?
3
Time period between the use of dragon balls during Namek Saga
4
How long before the events of Dragon Ball were the balls last used?
0
How do Goku and Gohan manage to turn into great apes in Dragon Ball and Dragon Ball Z?
3
How/Why did Mai from the future Trunks, in Dragon Ball Super get young?
3
Is there a reason for the discrepancy in the length of the Serpentine Road in the Japanese and English versions of Dragon Ball Z?