Why is Kuga Yuma's C-rank uniform black? Every single other C-rank wears white

By default, every C-rank Border member wears a white uniform. But Kuga wears black. Is there some reason behind this distinction? 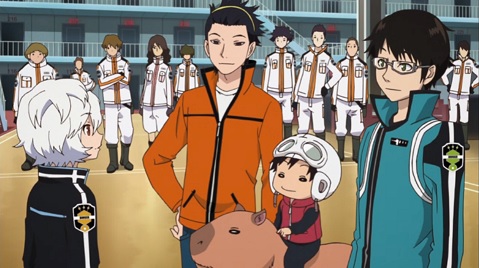 The uniform is patched with the Tamakoma branch's insignia, so it should be a new one.

At first I thought it was because of the black trigger, but he is not listed as an S-rank, and its a key plot point that he keeps his black trigger "apart" from his Border assignments (so far).

Yuma's father Yugo worked with Border when it was founded, so he had Trigger technology from back then. So when Yuma first used a Border Trigger years ago when with his dad, the Trion body and uniform designed for him came from the Borders old days. So for him he uses the same Trion body now with the black uniform, rather than make a new Trion body with Border's current white one.

An example of what I mean is Konami Yuma's mentor, said she has been in Border even before Jin. She had short hair in her early years, so even though she has long hair now. She lets her Trion body keep the short hair she used to have, because her current real body long hair is not fit for battle. Basically unless Yuma makes a new Border's Trigger, Trion body, he will have the black uniform.

Not the answer you're looking for? Browse other questions tagged world-trigger or ask your own question.