Could Okabe have saved Mayuri in the alpha world line?

He can save Kurisu. In order to do that he needs to make it look like she is laying in a pool of blood being unconscious. At the time same her death would normally take place. 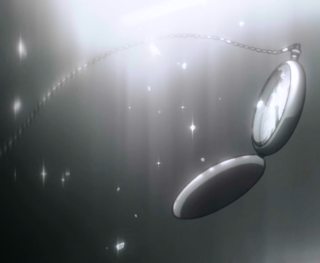 Disclaimer
Needless to say, this answer contains spoilers. Therefore, I have chosen not to spoiler it.

No, Okabe could not have saved Mayuri, as he found out by himself the hard way.

And Okabe did try to save Mayuri countless times. If breaking her watch were enough to save her, then the convergence point would have been the event where her watch breaks. Thus, in at least one timeline, Mayuri's watch would've broken without Mayuri dying.

Edit (after playing the VN):

Pockety (the watch) actually never broke in the VN, or if it did, it was considered so minor it was never mentioned even once.

It is likely that the scene where it breaks was added for the anime to stylize Mayuri's death, in order to imply her death without actually depicting it. Remember that Mayuri died in several — at times gruesome — ways, such as getting shot in the head, or getting crushed by a subway train. The anime team likely didn't want to make the show too gory, as it would not have fit with the rest of the series very well. The theory isn't too far-fetched, since watches symbolize time, and time symbolizes life. Since Mayuri carries Pockety (a memento of her late grandmother's) at all times, it may as well signify her own life; its breaking meaning her death.

Additionally, despite carrying its own name (Pockety), the watch was never important in the VN in the first place. I figure the anime team wanted to give it meaning in some form, which I'll admit is a nice touch on their part.

In any case, the watch breaking was never meant to be important at all.

As for Makise Kurisu's case. Okabe could save her by making her lie in a pool of blood, because that was the only thing he ever established. When he first saw her, he never actually bothered to check if she was dead in the first place, so convergence might not have been her death, but her lying in a pool of blood instead.

This was of course a gamble. There was no guarantee it would've worked, since they didn't know which event was the actual convergence point: Makise's death, or her lying in a pool of blood (or both). The fact that she survived was merely a lucky shot that could've gone wrong.

In retrospect, Christina could've died of a heart attack after getting tased by Okabe. Mayuri died of heart attacks quite often too, when nothing else was killing her. Although Mayuri's death was never specified in those instances where she simply "collapsed, breathing heavily, clutching her chest", and turned out to be dead, I'll just assume it was a heart attack.

Okabe simply got damn lucky with his assistant.

Kurisu ends up in a pile of blood on the same place around the same time in almost the same way. But Mayuri's deaths are all different, one time she gets in front of a train and another time she gets shot. Since its not provable I would say maybe but most likely not.

It's not possible to save Mayuri in the alpha world line. Actually, if the police came and stopped the rounders - Mayuri would simply have a heart attack. In the VN, if there is no actual way to die - the world just killed Mayuri by giving her a heart attack. It's a fixed point in the Alpha world line, Okabe had to go back to the Beta line to save Mayuri, but that would cause Kurisu's death, and there the manipulations start.

I don't think it was possible.All the world lines which contained mayuri's death,the alpha line were all closely tied together like a thread,hence,they all converged to the same event,that is,mayuri's death and sern's dystopia.Even if okabe were to stop watch from breaking,there would be some other event which will break it,otherwise,if he breaks it himself,a common event in all attractor field,I think mayuri is sure to die,this means the only way to escape is to escape from world lines 0.00% to 0.99%.Also in beta world line there is only one that is,steins;gate world line in which kurisu doesn't die and WW III doesn't occur.

Though in the anime it was not possible because it was a fixed point on the world line. Yet I do think it is possible to save Mayuri and Kursiu without leaving the alpha line. I will explain why but first you need to know about the world lines. The Alpha line is the line that Okabe and his friends first started on but every time they sent a Dmail (I watched the dub i'm sorry.) they were sent to a branch of that line. As they sent more and more Dmails they grew feather away from the Alpha timeline. Supposedly to save Mayuri they needed to move to the beta line because her death was a fixed point on the Alpha world line. I do not believe that this is necessarily true. Okay, listen carefully, this is where you might lose me.

In one of the episodes it shows the world line with an event. If the world line has the event that we will call point A then what happens of you use the Dmail to not necessarily push you off of the Alpha line but pushed you far enough away from the Alpha that the fixed point changes. For example what if Okabe had sent a text to someone so that they called the police to show up just moments before Moeka breaks into his apartment. The police would deal with the ringers because they are a threat to society and Mayuri could not get shot. I'm not 100% sure that Mayuri would not be killed by some other event within Okabe's house but this would be there best bet.

If anyone sees anything wrong with my theory please let me know so that we can talk about it. Nothing is perfect but I would like to hear others thoughts on this idea because personally I believe that the whole 1% thing kind of bugs me. I always wondered how saving Kurisu didn't push them off the Alpha line in the first place.

One more quick thing I want to say. This whole show is a loop. Every thing that happens in the end would have just led to him falling into the same path. For example. If Kurisu actually died before he sent his first Dmail then she would have been dead in the Alpha timeline. This proves that in the first episode that Kurisu was never actually dead but just faked by the future Okabe. Another example is when Kurisu goes back in time to save Okabe from falling onto the R world line. When Kurisu and Okabe kiss in the anime he says that it was not his first kiss. He said that happened when he was younger. I believe that this implies that when Kurisu goes back in time to save him from falling on to the R timeline that he had encountered that before he even met her and the original story began.

the death of Mayuri causes the time machine invention by Okabe, and that results to the arrival of Suzuha, which will influence the future very much.

you can't cancel the reason without changing the result that happened. once you save Mayuri, the worldline must have changed greatly.

if you really want to save her in the same worldline, you must find another strong reason to make sure the invention complete at that time. it might be harder than just go back to the original worldline.

8
How are the Divergence Number and world line related?
14
What is happening at the start of episode 12 of Steins;Gate?
2
Questions about the time-travel scene in the Steins;Gate movie
5
How was Future Okabe sure that Kurisu's death wasn't a convergence point that would inevitably happen?
10
Inconsistent D-mail Dates in Steins;Gate Season 1 and Steins;Gate 0
0
Where is Kurisu Makise really is?
4
Which is the first D-Mail?