What is the extent of the power of the Dragon Balls?

I have recently started watching Dragon Ball Z(Remastered Edition)* after a long break. There is this scene in S01E21 (Counting Down) in which Master Roshi and others summon the dragon to wish Goku back. Just before they can wish him back, Oolong (the pig) says:

Excuse me, Mr. Dragon could be possibly destroy the Saiyans that are on the way to Earth right about now.

to which the dragon replies:

Your wish cannot be granted because the guardian of Earth created me. I cannot grant a wish which exceeds his power.

Now, this has put me into dilemma. If the dragons' power was only limited to Earth, why was everyone around the universe after these Dragon Balls?

Here are few questions that bug me:

You misunderstood Shenlong's words. Shenlong was created by the guardian of the Earth, Kami, in chapter 165. Therefore, Shenlong could not have greater powers than his creator. Shenlong's powers are not limited to the Earth nor are they limited to Earthlings. That's not how it works and it is not what he meant by that. They are disallowed from killing others, creating love, or anything that Kami wouldn't have been able to do with his own power. 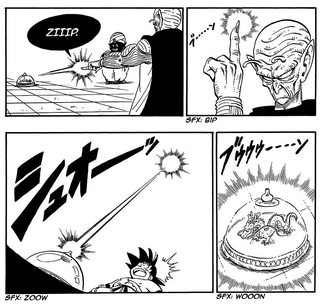 Although the above statement is still rather vague. I mean, does this imply that they could wish for weak Earthlings to die, because Kami has the powers to do so? Or could Kami himself grant immortality, since his powers should be greater than or equal to those of Shenlong's? Those rules aren't ever explained in detail in the manga as far as I know, and it is never explained whether Shenlong can't kill anyone or only those stronger than Kami, but it is clear that Shenlong couldn't kill Nappa, Vegeta or any other villain Earth has encountered, because neither Kami nor Dende were that strong to begin with.

You can read more about the Dragon Balls' or Shenlong's powers on the wiki page.

The Earth Dragon Balls are about 7.5 cm (approximately 3 in) in diameter, and they summon a dragon named Shenron. They were created by Kami, and later re-created by Dende. Shenron can grant a wish within its powers as long as it does not kill, create love, repeat a wish he previously granted, surpasses its creator's power, and a few more restrictions. Legitimate wishes include eternal youth, immortality, bringing back a scorched forest or even an annihilated planet. Also, it is possible to return a person to life, although only if they meet certain criteria, like dying of unnatural causes or within the time-frame of a year (half a century according to the Ocean Dub), and each individual can only be brought back once. The Eternal Dragon will grant the first wish uttered after it was called, by whomever is present.

As far as I remember, Goku was sent to destroy Earth. But for the whole time, he did the opposite to that . The 2 Saiyans that you are mentioning about, are Vegeta and Nappa. Both come to find Goku and destroy him along with Earth.

Shenron couldn't grant this wish because he said that he can't use his powers to kill or forcibly against anyone stronger than his creator.

Later on, Dende becomes the guardian, and recreates the Dragonballs because the old ones disappeared when the combined Piccolo/Kami died. After he recreates them, some time passes and he improves them, allowing three wishes to be granted instead.

3
Why is Trunks not as powerful as Gohan when they are both human-Saiyan hybrids?
4
Is there any explanation on how Z fighters control the power of their ki based attacks?
3
DBGT: Does Goku die of old age when he turns SSJ4 in the future?
3
Time period between the use of dragon balls during Namek Saga
4
Why is King Kai still dead?
5
Is the intersection of people killed by Cell and Majin Buu still dead?
3
Do universe 6 saiyans transform more easily than universe 7 saiyans?
2
Dragonball Z - Rule for dragonballs
5
Why do the Z-fighters hide their power?
1
Which transformation gives more power, Super Saiyan Rage or Super Saiyan Blue Evolution?