What does the top flag mean on the Japanese theatrical poster of "From Up on Poppy Hill"?

In the Japanese theatrical poster of From Up on Poppy Hill designed and illustrated by Hayao Miyazaki, there is one flag before the two-letter signal (UW): 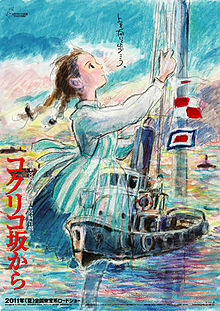 If it's not a numeral pennant, then is the flag what I think it is, the national flag of Japan? What are the signal flags as a whole supposed to mean?

In the top middle of the poster is written Ue wo Muite Arukou.

"Ue o Muite Arukō" (上を向いて歩こう, "I Look Up As I Walk") is a Japanese-language song that was performed by Japanese crooner Kyu Sakamoto, and written by lyricist Rokusuke Ei and composer Hachidai Nakamura. Ei wrote the lyrics while walking home from a Japanese student demonstration protesting against a continued US Army presence, expressing his frustration at the failed efforts.

The lyrics tell the story of a man who looks up and whistles while he is walking so that his tears will not fall. The verses of the song describe his memories and feelings. Rokusuke Ei wrote this song while coming back from a protest against the Treaty of Mutual Cooperation and Security between the United States and Japan and feeling dejected about the failure of the protest movement, but the lyrics were rendered purposefully generic so that they might refer to any lost love.

In the poster, Umi also looks up while she is raising the flags, possibly so her tears will not fall when and if she thinks of her deceased father who was killed in the Korean War. That, or Miyazaki is using Umi's story to express "his frustration at the failed efforts"?

When viewed this way, it does seem like the topmost flag is being raised by the girl in the way of a flag raising ceremony and the flag being raised is the hinomaru flag. The fact that the flag is drawn tapering to one end like the numeral pennant 1 just adds to the overall sketchiness.

Maybe Miyazaki did draw the hinomaru flag to reference Japan, seeing off his country as she sails off in the dangerous and wrong path to destruction, but this interpretation is rather unfounded given the evidence presented so far, so I hope someone chimes in and writes a better answer. Meanwhile, I will continue to do research on it and hopefully come up with something to support or refute my argument.

This poster is based on the rough "storyboard" sketches drawn for use as a visual aid while the animators were discussing the plot prior to any actual animation being done. So the vague top flag is just a quick representation of the red-and-white-striped pennant the tugboat raises. However, the top flag does look like the Japanese flag as it would be seen by someone looking up at it from directly below (with perspective distortion) so using this sketch on the official poster might indeed have some of the implied double meanings mentioned in this thread. Ref: The storyboards are included in the 2-dvd USA version of this movie.

The first set of two flag is Uniform Whiskey which means have a pleasant voyage. The pennant and the uniform Whiskey the tug puts up just means message received and replying to your message.

It could be the former "affirmative yes" flag? 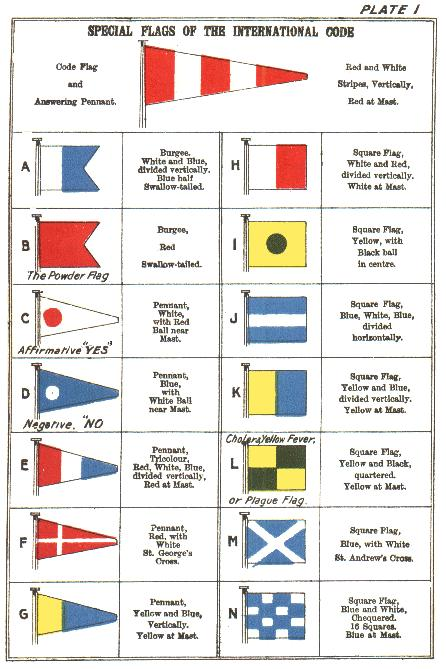 6
What are the differences between Studio Ghibli's film adaptation and the original manga of "From Up On Poppy Hill"?