According to the wiki page on Trebol, he should be a Logia user, using the Sticky Fruit's powers. This was verified in chapters 741 and 760, when we could see Trebol completely unaffected after being cut into pieces by Usopp and Law. Now chapter 782 makes me really confused.

In chapter 782, we could see how he was hit by Luffy, yet remained completely unharmed despite being hit with hardening Haki. Logia users should be hurt by attacks like these. Additionally, later in the chapter we can see Law cut his body open with his sword. This could be defended by the fact that Law could have imbued the sword with Haki, but the appearance of Trebol's shriveled up old body, makes me really think Trebol was Paramecia after all. Although a Paramecia should not have been able to live after having his body severed. Now what's the deal here? 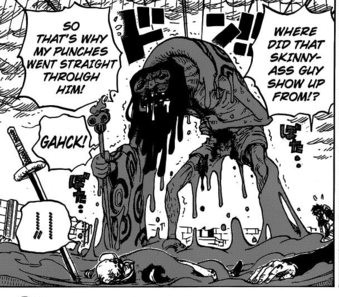 I truly believe he is a Logia user, it just makes sense. I agree that he used his powers to make his mucus outer shell. I believe he activates his full Logia powers when he needs to, thereby making his coat an extension of his body. Then he refrains from using his powers to keep his real body separate from his coat so as not to be hurt by haki users. So opponents never really know what they are hitting.

I compare him to a jello mold with a piece of pineapple in the center. Hard to get to that pineapple by simple means lol.

I also agree that Law's sword was imbued with haki to hurt him. They were in Law's Room after all, so it is quite possible that he was able to gain control of his arm and attach haki.

There are still things to clarify so far.
Right now, he may be paramecia or logia.

Logia because of how flexible he can be and surviving after being cut by Law.
Paramecia because he may be just like Magellan who produces poison out of his body but cannot transform his body to be entirely made of poison. Both of them just produce the material out of their bodies. He survived Law's cutting maybe because of his very thin and flexible body that he could hide it in his very thick mucus.

Why Trebol is not a logia?

Why is Trebol a logia?

After reading all discussions about Trebol I came with this conclusion:

Many are using the argument that Trebol hid within a piece of his body to evade Usopp's attack and that Luffy missed him because of how skinny he is. Trebol's height never changed. Even after losing his outer layer he was still just as tall. So for him to hide within his body like that would mean he'd have to be a contortionist with mad skills. And the angle and way he was looking through the hole Luffy made would suggest he could move his neck and body in a way that would snap a normal human spine.

In the anime, after Usopp's attack, Trebol reforms himself entirely. You can see his hand reform as it is grabbing his staff.

Trebol's devil fruit type is a mystery so far. Oda will have to confirm which he truly is. If he reforms himself after the explosion then we will have our answer. I still believe he is a Logia user.

9
Does the size of a person matter when Devil Fruit powers are involved?
3
How do Logia powers work?
3
What powers did Gol D. Roger possess?
1
Are Logia types overpowered?
0
Can Sea-Stone objects be given Demon Fruit powers?
2
What are Croquembouche?
1
What are Reiju's powers
1
Do Sugar's powers nullify other devil fruits?
3
Does using Devil Fruit powers drain the user's stamina?
0
How did Aokiji survive Whitebeard's attack; observation Haki or something else?