How did Edward manage to defeat Father?

I remembered watching a battle scene from the 2009 anime titled Fullmetal Alchemist and was puzzled by how Edward Elric managed to throw volley of punches at Father, a homunculus or the dwarf in the flask whom had earlier absorbed an entity and gained the power of God.

Is it because the power of God cannot be controlled and led to Father's defeat, or because the absorbed homunculus or souls are revolting inside Father thereby restricting Father's focus on a battle? How did Elric win this seemingly impossible fight? What happens to Father after vanishing into thin air? Did he return to the flask?

I'm going to answer based on the manga, because I still have not seen the Brotherhood anime. I think this is just fine, as it seems that the anime streamlined the ending a bit.

This is going to be spoilerific, but scarcely more than the question itself, so I'm not putting all of it in spoiler tags.

Let's start at the core of the issue. You say that Father "absorbed" God. This may be a bit of a misnomer. It's more accurate to say that he simply contained God within himself to control its power. And this is the crux of his defeat. 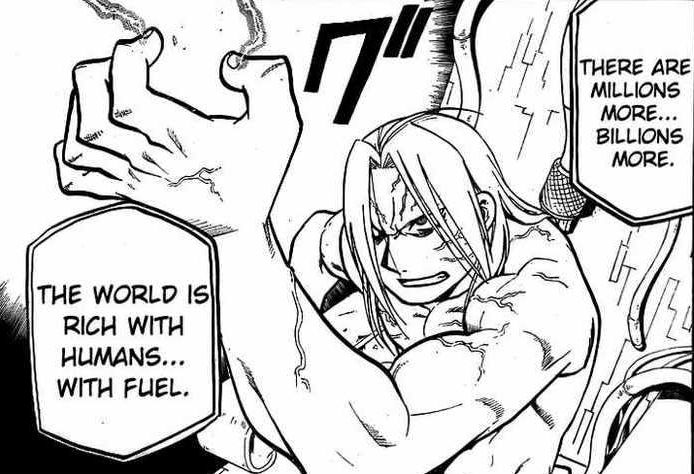 While not explicitly stated, it's obvious that Father needs tremendous amount of energy to contain God. He already had the power of half the people of Xerxes, but his plan was to bolster this power by the souls of all the people of Amestris. However, Hohenheim managed to thwart this part of the plan by forcing the release of these souls right after they were taken.

This weakened Father's grip on God, but not enough for full release yet, although his control over his powers obviously weakened (See chapter 105, pages 32-33). After this, everybody started attacking him. The military, the rebels, Edward, May, and even blinded Roy Mustang. Father deflected all these attacks without even lifting a finger, sometimes even retaliated. However, even though he seemed to be unaffected by all these attacks, they do require energy from him to block. Slowly but surely, his energy reserves diminished to the point that he started to take damage.

This led to even more energy drainage, because now he had to use the energy to rebuild himself. Energy that he desperately needed to contain God. As the battle waged on, it became more and more obvious that God was actively battling against Father to escape. He tried to salvage the situation by absorbing Greed, but this turned against him, because Greed (and as far as I understand, only Greed) betrayed him and caused his limbs to turn fragile. That and the final punches from Edward pushed his energy reserves over the limit, and he no longer had the power to contain God. What happened next is sort of hard to explain, so I'll just refer to Chapter 108, page 21.

After all this, Father, now reduced to Dwarf in the Bottle, found himself in front of The Gate. He had a brief encounter with Truth and was then violently dragged within The Gate, to whatever fate awaited him in there.

Edward might have defeated Father but Father was in a highly weakened state and not be able to fight back allowed Edward to beat the homunculus. However it was kind of an unfair fight and if Father still retained some power left, he would of annihilated Edward with breaking an sweat. Edward is a good fighter and alchemist but Father has the freakin power of God itself and even before than, he was already the most powerful alchemist of all time alongside Hohenheim of course. Edward only managed to win with Father's power handicapped and the army providing backup. In a one on one fight, Father would have undoubtedly won

I believe that because the truth had ed's hand and al gave his soul to return something that truth had already claimed as his then when ed got it back he literally had the "hand of god" And because of this it trumped the small amount of it'self that father had managed to contain.

5
How Edward managed to escape from Gluttony?
8
Why does Edward prefer to use his automail over Alchemy?
16
Why did Edward not wear a uniform?
9
At the end of the story, could Edward learn Alkahestry?
11
Why didn't Edward Elric get his leg back?
4
How does Father prevent the use of alchemy in Fullmetal Alchemist?
0
Shouldn't Edward Elric still be able to perform alchemy?
1
How did Mei Chang use Alchemy when Father stopped it?
0
How can Edward perform human transmutation on himself?