Why didn't L check Yagami Light's handwriting and try to match that to the handwriting in the Death Note when he had the notebook?

L had foreseen that the handwriting could be faked. Later in the story, one of Near's subordinates created a fake Death Note containing the names Mikami had written. Mikami didn't notice this since the fake book had "his" writings in it. L, being someone on a greater level than Near, would have thought that Kira might have faked his own handwriting so that just in case the Death Note falls into the SPK's hands, his handwriting won't be used as evidence. Therefore, he didn't even bother trying to check Yagami's handwriting. Also, handwritings are not that distinguishable from one and another. It is very likely for some people to have the same or similar handwriting.

As a side note, we can try to do a similar experiment by showing someone we know our handwriting using our non-dominant hand. I practiced this before and the person didn't notice that it was me writing it, despite knowing my usual handwriting.

In addition to what Sakurai said, there were also times in the show where L thought that Light could have been manipulated by Kira, so it would have been in Light's handwriting anyway. He already practically knew that he was involved with Kira in someway or another, but at that time in the show, he theorized that Kira had cut ties with him, so it did not matter if it was his handwriting or not.

After handing over the Death Note to Rem in the plan to free Misa out Light says (chapter 54): 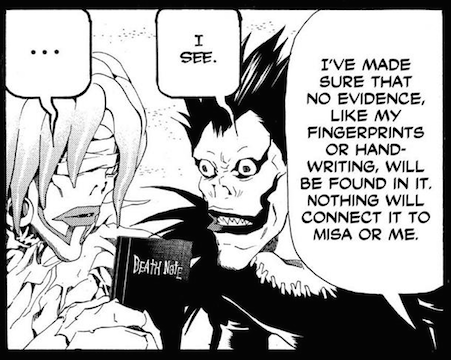 In other words, he tore the pages out and checked there's none of the fingerprints or his handwriting, so it's no surprise that L didn't check out the handwriting since there weren't any other names written beside Higuchi's.

All though it didn't mentioned in the anime, it's unthinkable that Light would missing do such an obvious thing.

3
Why didn't L check for fingerprints or hair?

10
Why was it that Light's father could see Light's lifespan, while Mikami couldn't see it (which allowed him to deduce that Light was Kira)?
5
Why was Ryuk tied to Light's Death Note?
8
Why didn't Light kill Mello?
9
Why didn't the Task Force capture Misa Amane?
3
Why didn't L check for fingerprints or hair?
5
Why does Light Yagami shuffle the two death notes?
3
Why did Teru Mikami confirm Death Note's validity by examining the pages with a microscope?
10
Why didn't Mello see Shinigami after touching the Death Note in Episode 29?
7
Why didn't Rem tell L's name to Light or Misa?
3
Is Light's insanity influenced by the Death Note, or did he make himself become that way?