Ask Question
Asked 7 years, 4 months ago
Modified 5 years, 5 months ago
Viewed 1k times
4
votes
This question was closed because it is a type of identification request that is disallowed by the community. It is not currently accepting answers.

It's about a boy with a supernatural power. He discovered his power when he was attacked by a black monster. As he threw a can towards the black monster, his power was activated, and a circle figure formed in front of him, which accelerated the can as it passed through and killed the monster. He also met a girl with a wooden katana who had the same power as him.

Pretty sure you're thinking of Gate Keepers.

It is Tokyo, 1969. Earth is under the attack of the "Invaders." Fortunately, though, the public is unaware of this. But to the secret orginazation, A.E.G.I.S., the threat is very real, and it is up them to stop this invasion. One day on his route to high school, Ukiya Shun observes a battle between a young girl and a group of Invaders. He ends up helping her and discovers that much like the girl, he possesses the ability to generate a "gate" of special power that only a few other people are gifted with. As a result, Ukiya then joins A.E.G.I.S. in an effort to recruit other Gate Keepers in order to protect the city, all while doing his best not to imitate his late father, whom he dispises.

The main character boy was trying to defeat the black iron ball monster attacking his house by throwing a can at it. He is the one with the wooden katana (Special Bokken Sword). The main girl uses a bow to fight. 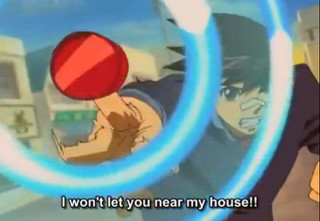 Not the answer you're looking for? Browse other questions tagged gate-keepers .