In Angel Beats, Kanade clearly entered the afterlife before even Yurippe did, yet Otonashi arrived later. Technically, Kanade must've died after Otonashi.

Unfortunately, Angel Beats! doesn't go into much detail about the mechanics of the afterlife environment it takes place in.

However, if we assume that the series follows the basic concept of eternity, then a partial explanation can be given.

I drew up this little image of the three different timelines that are present in the series: 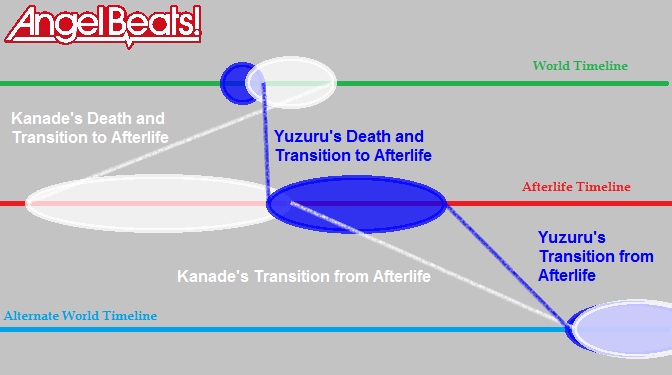 Like I said, the series never really explains the finer details of the afterlife and what exactly happens when someone moves on. This is the best explanation I can give you at the moment. Perhaps some more light will be shed on this matter in the future.

I just saw the anime, and it got me puzzling for a while, but I had made up a somewhat believable explanation:

The reason Otonashi didn't end up in the afterlife school upon death, is because he didn't really die with regrets. His own theory was that he simply "forgot" and thus ended up in the school, but that doesn't make much sense. Instead, he moved on, rested peacefully for a while, and then Kanade's wish brought him to the school.

In addition to Lunar Guy's explanation, my theory would be that, even though Yuzuru died first, the rate of their transition is different, it probably took Yuzuru a long time to transition between two timelines than what it took Kanade. That's why Kanade arrived first, rather than Yuzuru.

To support this, Kanade's regret was that she could not thank the person who gave her his heart, so I'd assume that some form of higher system craftily planned for Kanade to arrive first rather than Yuzuru, so that she could fulfill her regret and move on. Otherwise if Yuzuru arrived first, there would be a risk that he would move on first, making Kanade's regret unfulfilled, leaving her stuck in the Afterlife.

I have a different theory:

I imagine the time it takes to transition into the after life = the number of regrets. The simpler the regret, the faster it takes to get to the after life. Kanade's regret was just to thank the person who gave her the heart, while otonashi'a regret is more complicated because he had no regrets, but he didn't know. Hideki came into the after life before Yui because his regret was just to catch a ball, while Yui was multiple things she saw on TV. Time of death does play a role, but I think second to the kind of regret. Yui could have died before Hideki.

This is the fitting interpretation for me:

I propose a different solution.

What if time in the afterlife traveled in reverse, compared to the "real" word? Then all the characters would be able to die and immediately travel to the afterlife.

Note: When I re-watch the series, I will look for supporting facts. At the moment, this is only a theory.

This answer may be wrong, but possibly Kanade was in a coma awaiting a heart transplant. Yuzuru died a bit later and donated his heart to Kanade. It'd make sense because Kanade has Yuzuru's heart in her. The surgery must've failed and she ended up dying, so that's why she remains in purgatory.

That's how I understand it anyway.

Remember when Otonashi signed that organ donor card before he died? Angel was given his heart because she needed it and came to the afterlife to thank Otonashi for his heart.

user1906user1906
1
1
Add a comment  |
Highly active question. Earn 10 reputation (not counting the association bonus) in order to answer this question. The reputation requirement helps protect this question from spam and non-answer activity.

2
What happened to Otonashi and Kanade in the last episode?
8
Why couldn't Otonashi of Angel Beats pass on?
3
Can we roughly determine the dates and duration of Otonashi's stay in the Afterlife World?

4
Is there any connection between Otonashi and the first NPC?
3
How is it possible to take 7 days to rescue the trapped survivors in the train crash?
11
How do Otonashi and Kanade remember Iwasawa's last song in their next life?
5
Why did Angel and Otonashi want to pass on and make others pass on?
3
How did Kanade get access to Angel Player?
6
Who is the mysterious Programmer of Angel Beats?