Viewers of the second movie are familiar with the gigantic mecha Super Tengen Toppa Gurren Lagann, the most powerful mecha that Team Dai-Gurren uses in the whole franchise. It bears a strong resemblance to Kamina, except with Simon's glasses and with no face. A number of sites note the resemblance, including the Gurren Lagann Wiki. 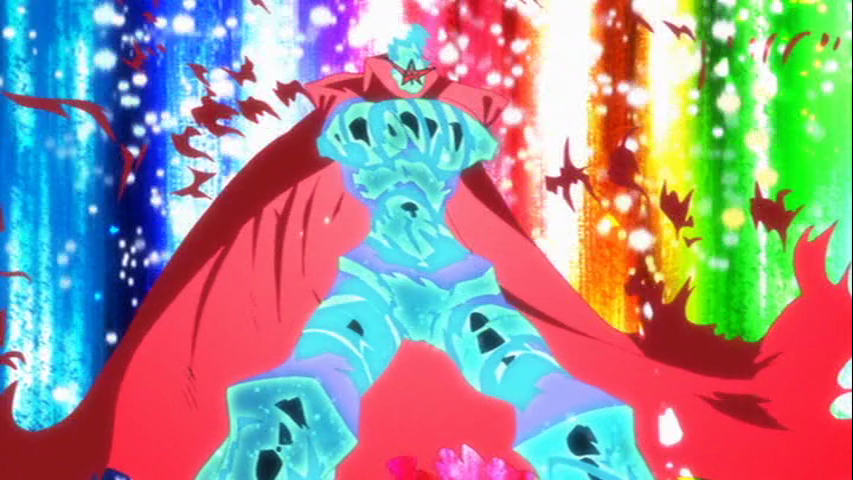 I don't think there is any official source on this, but I would guess STTGL was made with image of Kamina in mind. Kamina was spiritual leader of Dai Gurren Dan and he was most influential person on all main characters, including Simon, Yoko, Viral and other. As that, they all see him as representation of power, freedom and determination. Fitting image for STTGL.

Also note, that at end of TTGL, it is said resurrection of dead people is (at least) morally wrong. So resurrecting Kamina, albeit temporarily, would go against believes of main characters.

This is not canon, but conclusions drawn from canon and logic on infinites...

Some things that should be considered...

In the Dimensional Labyrinth, they encountered what most fans believe to be a ghost/image/memory/reincarnation of the "true" Kamina. However, it should be noted that each of these infinite universes had its own Kamina.

A concept to take into account... Kamina only died in the primary universe. His many variations were alive in the labyrinth. Each one of these by itself was not the prime Kamina, but between them, they had the traits of the prime Kamina.

This means, likely most had the desire to achieve the higher level than they were and would never be satisfied in that regard, and to break through any boundary. If one version of Kamina could reach a point to where he could break through from one dimension to the next, things get interesting. The fact that this manages to happen is evidenced from the way they're pulled by him back into the prime world, and a very prime-like Kamina is appearing nearing less primish Kaminas (Kaminai?).

Through this interaction, the core personality of the prime Kamina would re-emmerge due to the Prime Kamina's traits being the most shared traits (likely causing many Kaminas to gravitate towards the original ideal as they try to reach their ultimate potential), and they would discover the nature of the Labyrinth.

These prime-like Kaminas would, by their nature, increase his power by reaching out to the other Kaminas. And any Kamina he could reach would likely also learn this ability (through becoming stronger, learning technique, whatever). And in infinite realities, there would be infinite Kaminas attempting this. Upon knowing the anti-spirals created the Labryinth as a prison for freedom fighters, he would desire nothing more than to break that boundary, and seek them out.

Although team Dai-Gurren may be limited in number, the dimensional Kamina would have no such limit, and be able to break them all out and give them energy to spare.

In a way, it would make sense, knowing the characters and the realities invoked, and would explain the reality-shattering power team Dai-Gurren achieved after being effectively decimated.

Although, I have to say, if my hypothesis is accurate, a side series about all these Kaminas and their journeys could be pretty interesting.

Not the answer you're looking for? Browse other questions tagged gurren-lagann .