The Chuunibyou crew wants to do what to “this world”, exactly?

What are they saying? Banishment or Vanishment?

There are several sources over the western web (just google it - I just did), and there is nothing conclusive, so if you can point to some canon or other eastern sources, appreciated.

It's probably "vanishment", though I think the evidence is a bit too sparse to be 100% sure.

The season 2 ED does explicitly say "Van!shment Th!s World" in Latin script (which is also the title of the ED song) : 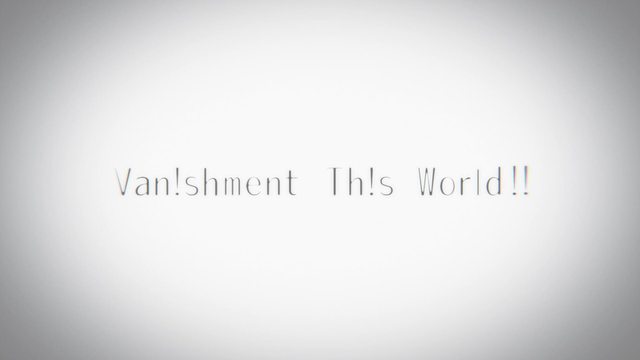 For reasons that are not entirely clear to me, people on the Japanese internet mostly appear to think that the word in question (バニッシュメント banisshumento) is from English "vanishment" rather than "banishment" (see e.g. one, two, three). Perhaps this points to greater awareness of English "vanishment" than "banishment" among speakers of Japanese? If this is in fact the case, it suggests that Rikka's catchphrase would have been intended to use the word "vanishment". Then again, perhaps the ambiguity was intended?

Though, to muddy the waters a bit, the B-side on the season 2 OP album is titled "PunIshment this worLd-VOICE-Episode.Φ".

While we're at it, apparently Japanese sometimes transliterates "varnish" as バニッシュ banisshu, so I suppose it's not entirely impossible that Rikka is actually saying "varnishment this world". Crazier still, the most recent Kuroko no Basuke opening (S3 OP3) displays the phrase "Burnishing Drive" for a move that everyone would think was called "Vanishing Drive" (バニシングドライブ banishingu doraibu). With Japan, all things are possible.

(Incidentally: I've only read snippets of the light novel, but as far as I'm aware, this particular catch phrase is anime-original, so that's a no-go for getting clarification.)

For the benefit of the reader who may be confused about why this is confusing, Japanese did not historically have a "v" sound, so borrowings of words from English that do have a "v" typically had the "v" replaced with a "b". This causes a bit of confusion in this case, since "banishment" could be from English "banishment" or from English "vanishment" with the "v" changed to a "b".

12
How much does the Chuunibyou anime differ from the light novels?
5
What is happening in the “Depth of Field” specials?
2
Where does the big weapon battle trope in chuunibyou come from?
16
In what order should I watch the various parts of Love, Chuunibyou & other Delusions?
7
Does the word “chuunibyou” originate from the anime “Chuunibyou”?
4
Where can I watch the Chuunibyou specials?