Ask Question
Asked 7 years, 1 month ago
Modified 5 years ago
Viewed 665 times
8
votes
Closed. This question is off-topic. It is not currently accepting answers.

I came across a few clips of this a few days ago, but I didn't attempt a reverse search because it was in .webm form, which I haven't had much luck reverse searching through Google.

The animation seemed to feature two main characters: a girl with short hair wearing cat ears, and a glassed girl wearing a dragon suit who appeared to be the enemy. The latter might have also worn braids. The dragon suit led me to believe that the first girl was supposed to represent a tiger, what with various elements of Japanese mythology representing them as rivals.

The tiger-girl may have had some sort of transformation sequence before the fight.

The dragon-girl could control ice, which put their fight heavily in her favor, since she and the tiger-girl were fighting in an area that was frozen over and covered in snow and icicles.

Throughout the scene, the tiger-girl attempted (mostly in vain) to land blows on her opponent while dodging the icicles her opponent broke off from the surroundings and shot at her.

At one point, the tiger-girl managed to dodge a volley of icicles and take advantage of an opening in the dragon-girl's defense to leap into the air and try to claw at her, which was shown through silhouette. Time slowed down for a moment as she flew through the air, and then it returned to normal as another wave of icicles seemingly impaled her in midair from all directions, kind of like this: 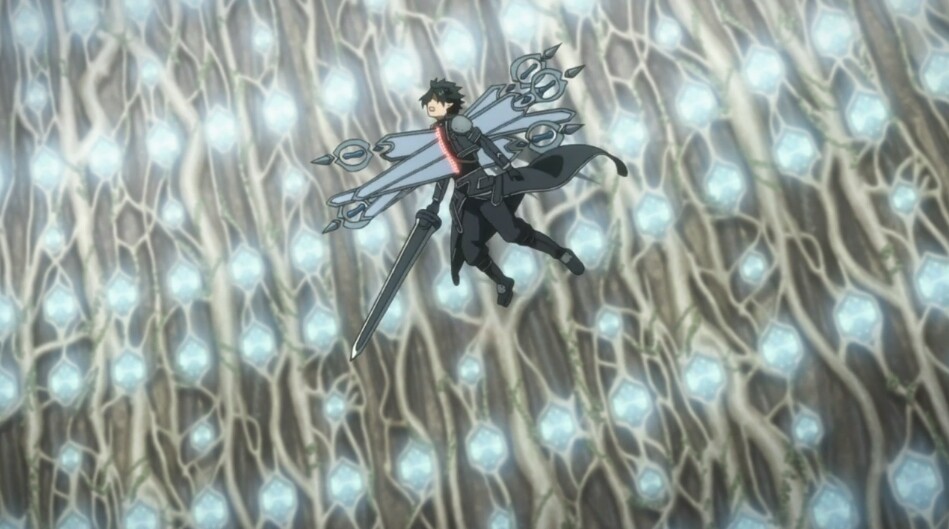 The camera then changed angles out of silhouette to show that the tiger-girl hadn't been stabbed - she was only trapped and tangled in the interlocking icicles as she attempted to break free.

That's about all I could remember. The animation looked very smooth and polished. At one point, something shattered, sending beautifully animated ice shards flying. Both characters were super-deformed/chibi.

I used "animation" and not "anime" in describing it, because I am not sure if it was just some independent video or an actual series. I tried searching various combinations of relevant keywords on Google, like "3d", "icicles", "chibi", etc., but most of what I got was mediocre DeviantArt and drawing tutorials.

It is Etotama, an anime currently airing this season (Spring 2015).

The anime's story revolves around Nya-tan, the cat of Chinese astrology who wants to become a member of the Chinese zodiac. [...] She meets Takeru Tendo, a high school student who lives alone in Akihabara, and becomes a freeloader at his house. Little by little, she gets closer to her goal.

The scene you describe is from the second half of episode 1, where Nya-tan (Cat) and Doratan (Dragon) brawled out with each other to give Nya-tan the setting of "a tragic heroine who's shocked because the Dragon Eto-musume she thought was a friend ended up being a traitor".

A screenshot from around 16:33 of episode 1, showing both the Cat and the Dragon. 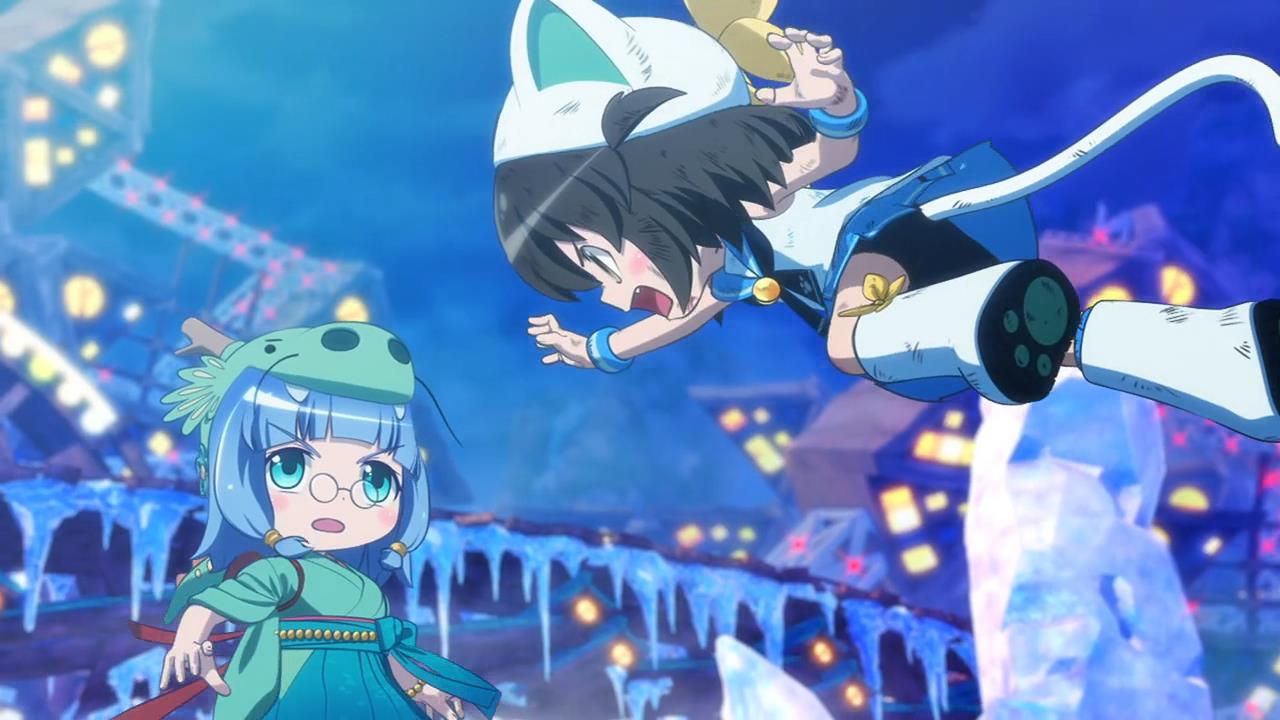 A screenshot from around 17:52 of episode 1, showing the Cat being restrained by multiple icicles. 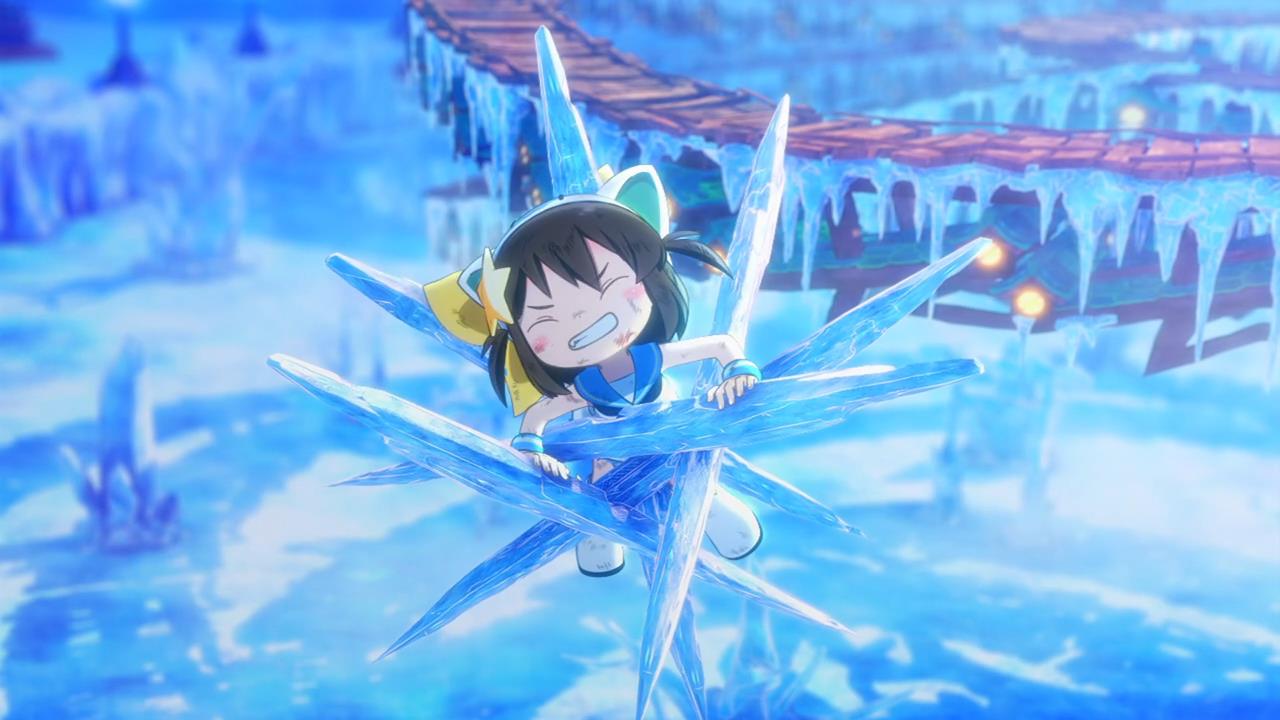 Not the answer you're looking for? Browse other questions tagged etotama .