How are the Tenchi timelines related?

Between Muyo, Universe, GXP, and Ryo-ohki, I'm thoroughly confused. Sometimes Tenchi series seem to be related (Ryo-ohki and Universe) and sometimes not (GXP). What are all the Tenchi series, are they related, and if they are, how?

This is a bit complicated. The links are to MAL, but I've found that different databases index these very differently. Sources are mostly in the links, but I had to reference Wikipedia and Tenchi Muyo Wiki as well.

Tenchi in Tokyo is a 26-episode anime series with its own continuity. The only other things in this continuity are the related specials.

There are a bunch of other spin-offs, mostly with their own continuities. Dual Parallel! Trouble is an alternate continuity, except with mostly different characters. It has a sequel of short episodes. There's also the Pretty Sammy series, which have Sasami as a magical girl and are independent of everything else. There's a 3-episode OVA for Pretty Sammy. There's also a 26-episode TV series with short specials, which in English is known as Magical Project S. This is a different continuity from the original Pretty Sammy OVA series. A third Pretty Sammy series is Sasami: Mahou Shoujo Club, but this is now following Iwakura Sasami, a new character, yet again in an alternate continuity, and it's very much removed from the original Tenchi series. It also has a sequel. Battle Programmer Shirase shares the character of Misao Amano with Pretty Sammy (where she has the alter-ego Pixy Misa), who also makes a cameo in Dual.

To the best of my knowledge, that's everything major that's been released to date. If I've missed anything I'll be happy to add it. 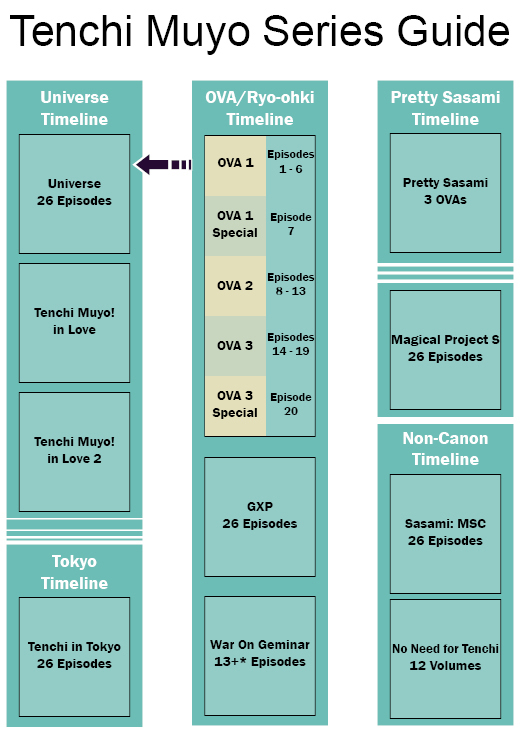 There are 3 major timelines in Tenchi Muyo!. There is the OVA/Ryo-ohki timeline, the Universe timeline, and the Tokyo timeline.

The OVA/Ryo-ohki timeline is the original timeline released, and is considered the primary canon story. It contains 3 OVAs and 2 OVA specials (which make up 26 episodes of Tenchi Muyo!, the one that aired in America). Also in this timeline is Tenchi Muyo! GXP, and the newer series, Tenchi Muyo! War on Geminar.

The final major timeline is the Tokyo timeline, which is where the series Tenchi in Tokyo! fits in. It is really on it's own there, but was originally planned to be an extension on the Universe timeline[source]

Overall, this is a series that has a lot of conflicting canon without really having anything set.

Not the answer you're looking for? Browse other questions tagged tenchi-multiverse or ask your own question.

3
What is the watching order for Tenchi Muyo?
2
What order do I watch the Tenchi anime in?