Feasibility of Guts using the Dragonslayer

In the Berserk manga, given the enormous amount of chapters dealing with Guts' over-sized sword, the Dragonslayer, I didn't try finding a pic that clearly shows the sword hanging slantingly along his dorsum. Neither did I notice the following issue before completing all the available episodes.

I'm intrigued by how exactly Guts was always able to wield Dragonslayer without at first having any difficulty from the hooks holding it, unhinges it to be more precise to say. If we assume having his arm fully stretched upward and trying to displace Dragonslayer from its stationary position, then prima facie the distance between his grip (not of sword's) and shoulders cannot be greater than or equal to the length of the blade of the Dragonslayer.

It is this impracticability that made me to request here, a picture of Guts along with the Dragonslayer featuring his dorsum without any cape, so as to understand the truth. While a picture will speak the answer by itself, a context around it or without the picture itself may help too.

Edit: On a side note, these pictures of Guts somewhat shows the hinge which holds off Guts' sword. But I can't fathom how then he could use the sword instantly when the sword needs to be unhooked every time to slay the enemy. 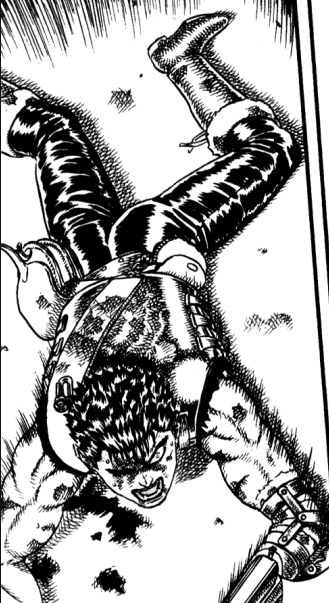 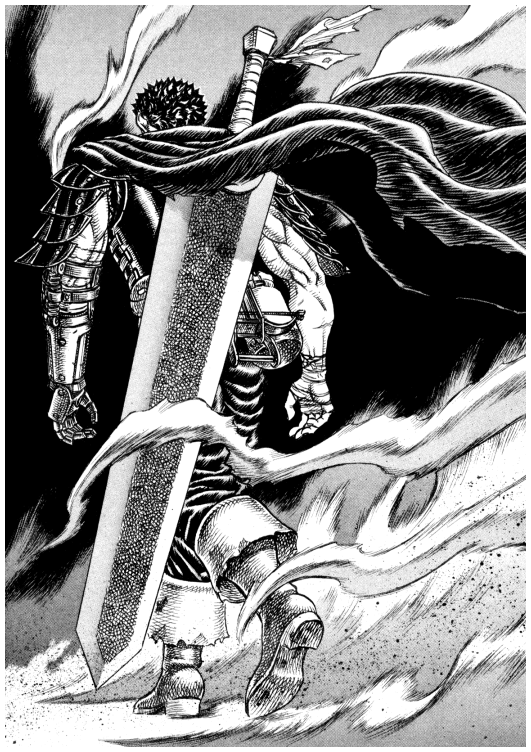 So if I am understanding the question correctly, you are wondering why he has no issues with unhinging the sword from his back and getting it into battle position.

Let me instantly break the bad news, in real life this would not have been possible. And it falls under the BFS trope.

Even so people tend to want to investigate how 'impossible' it would be to wield such a weapon. And which real life weapon would be most comparable to this. They came to the following numbers:

So coming back to your question, to displace the sword, assuming that Guts and the blade are equal in height and the blade weighs 220 pounds. Trying to pull it with a stretched arm length of 0.95m (it is said that the length of fingertip to fingertip is roughly your body length)

(not sure how to do the maths from here, but feel free to edit it in)

And to round up the post, the closest resembling sword to that of Guts', would be a two handed ceremonial sword which only resembles the blade in length (199cm / 78.3inch) and weighing much less (5.42KG / 11.9 pounds)

Looking at the images given, I can't imagine his sword to be any less than 180 kg, even if it was high-carbon steel it should weigh more than that. Also, since he doesn't unsheathe basically any of his swords and just keeps it hung on a couple of loops by the crossguard (if I remember correctly), he doesn't need extreme reach to use it but only about a foot or two to get the thicker base of the blade free.

The sword is not held by hinges, but with a hook at the top that goes into a ring on the sword near the handle, and a long leather belt that has a cranny at the end of the tip of the sword.

I actually have a detailed/movable figurine of Gatsu with the dragon slayer and I can remove the sword.

It shows in great details how the sword is holding onto his back. The hook is more like a pin actually and makes it very easy to remove the sword.

Also the author does not always draw the whole thing. Like in the picture on the right, we do not see the leather belt that hold the tip of the sword. yet the sword is shown being slightly tilted. I am guessing the author was being a bit lazy/pressed by time.

If it was real/human-sized, the way is it made makes it actually quite easy to take out, but not to put it back since you need to put the hook between the shoulder blades in the loop and then move/lift the sword until the tip is in its cradle at the end of the leather belt.

No one could swing this sword in real life but even the Mountain from GoT is not as strong as the fictional Gatsu. Perhaps no human could ever get that strong, but there are other things to show he's somehow superhumanly strong even if it's all "natural" in the manga/anime. As a skinny (relatively) 15 year old he's still swinging around a sword with speed that is clearly many times heavier than the heaviest swords used in real history.

He's also been able to stabilize the mast of a big ol' ship. His strength is comparable to Hulk levels despite being much much much skinnier than a superhero character like the Hulk. In a world that is gritty and realistic EXCEPT the supernatural demons of course, his strength not being explained by anything supernatural has always been the one "catch", but I guess that's kind of a cool, special thing about it. Just by genetic miracle, sheer will, or some other explanation, he is, without supernatural ability--many times stronger than the strongest men who have ever lived. It's kind of cool because usually characters in fiction with that much strength need a supernatural or sci fi "boost".

But yes, it's impossibly large for a human in real life to swing--really to pick up for most of us. When you factor in momentum and leverage/pendulum stuff and all that nonsense. One's forearm can get tired just waving a crow bar around in the air for a while and the metal of the Dragon Slayer is likely no less dense.

Also, I forget when and why he changes it up or how often he goes back and forth, but clearly Miura would sometimes just have the "clip" at the top and other times have the clip and the belt at the bottom. I'm not sure if there was a rhyme or reason for why it would switch sometimes but most other design elements are pretty consistent with his gear.

In the Sword of the Berserk video game which the story he wrote and sort of directed, he just has the clip as well--no belt at the bottom.

Death to the God Hand

MichaelMichael
1
Add a comment  |
Highly active question. Earn 10 reputation (not counting the association bonus) in order to answer this question. The reputation requirement helps protect this question from spam and non-answer activity.

8
Where in the manga does the Berserk (1997) anime end?
7
Why did Guts have sex with an Apostle? Was he aware that she was an Apostle?
5
Why was Guts called the Black Swordsman?
5
In the Berserk manga, what was the interpretation when Guts was lying on his back looking at the starry heaven?
10
What happened at the end of the anime Berserk?
1
What is the difference between the new version and the old one?
0
What section of the 2016 Berserk anime is covered by the 3rd movie, The Advent?
3
What did Griffith mean when he said "you are mine" to Guts?
0
What does Guts have in his left arm and when did he get it?