What is the source of this animated GIF of a couple slapping each other in play? [closed]

Does anyone know the manga's name?

Thanks in advance n_n

Note: This is a bit too long for a comment, but I'm not really sure about my answer. If something is egregiously wrong, I'll delete this.

I ran some reverse image searches and noticed that the GIF appeared to be created from this image set: 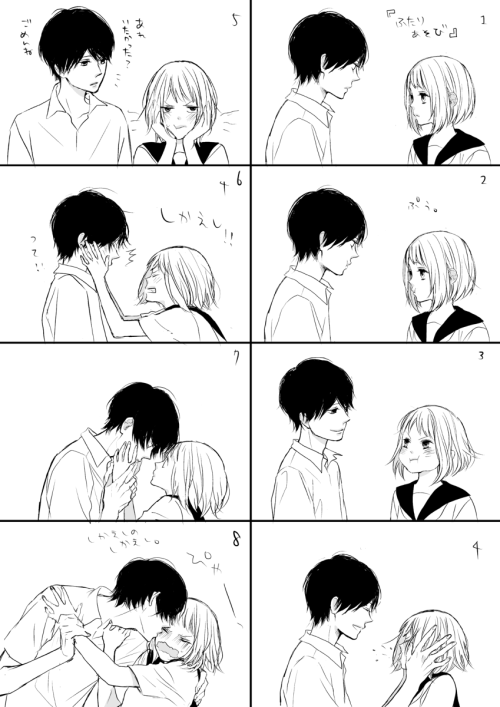 The Tumblr source links to a now-deleted Pixiv entry by the user ましき ＋ まこる. Given the lack of series-specific tags on both the first Tumblr source I found and this one -- they simply state "Pixiv" and some generic description tags -- I'm inclined to suspect that this might be original work (or at least some sort of doujinshi). However, I can't read the Japanese of the caption of the second source, and so I may be missing something from there. Moreover, since the original Pixiv image appears to have been removed, it's hard to say.

MaroonMaroon
14.3k1414 gold badges6868 silver badges134134 bronze badges
1
Add a comment  |
0
votes
Want to improve this post? Provide detailed answers to this question, including citations and an explanation of why your answer is correct. Answers without enough detail may be edited or deleted.

The characters may possibly (IF I am making sense of the reverse image search results) be Mirai Kuriyama and Hiroomi Nase from Beyond The Boundry, but the work is apparently original. https://en.wikipedia.org/wiki/Beyond_the_Boundary