What exactly happens to Kyuubei at the end of Rebellion?

Note: this topic was somewhat addressed in this question, but remained unclear to me after reading the answers to it.

At the end of Rebellion, after Homura has rebelled and created the Homuverse where everyone can have their desires for love and friendship fulfilled, after the end credits, we see Homura in a field, holding her new soul gem and dancing around a mangy, scruffy, miserable-looking Kyuubei. 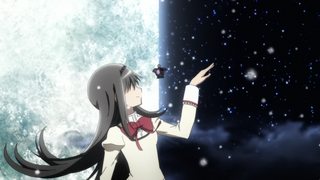 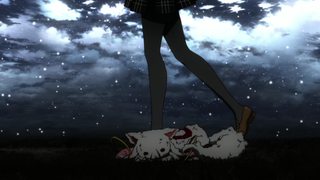 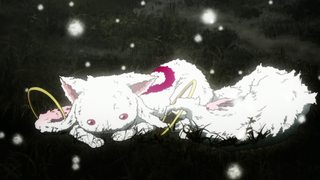 As the movie ends, the camera closes in on Kyuubei's face, and we see its eyes seem to be ringed with the same black field as the witches' curses. 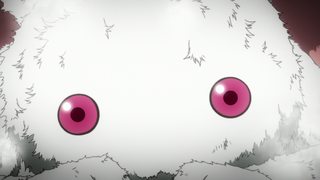 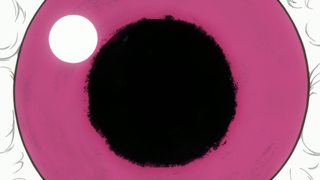 What exactly is going on here? It seems clear that Homura is torturing Kyuubei for its many crimes, but what exactly is she doing?

During the conversation near the end of the series between Kyubey and Homura, Homura mentions that although Madoka's wish prevented witches from being born, the curses of the human world still remained and continue to haunt humanity in the form of "magical beasts" (魔獣), demons of unknown origin.

When the Universe was being recreated Kyubey laments that it's kind should never have messed with Human Emotion when Homura reveals that her Dark Gem is the pinnacle of human emotions. When Kyubey tried to flee Homura catches him and says she still needs it's existsnce to deal with the curses of the world. after all, in Homura Universe, Magical Girls don't seem to need to fight anything anymore

As she swallows the dark orb, she claims it is the pinnacle of human emotions, something more passionate than hope and deeper than despair: Love. Kyubey says Homura is no longer a magical girl or a witch, and asks what she is becoming. Homura transforms into a new costume and grows a pair of black wings. Homura says that since she is a being that brought down and imprisoned a god, it's only appropriate to call her a demon. Kyubey exclaims that his kind never should have experimented with human emotions, as this is a result they can't handle. Kyubey attempts to run away but Homura, now a giant, catches him. She claims that she still needs his existence to deal with the world's curses, and says she'll make Kyubey cooperate. 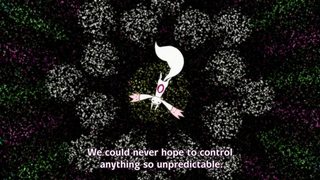 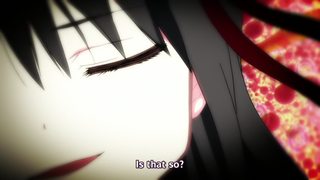 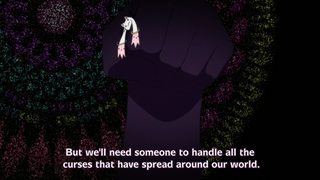 So Kyubey, or the Incubators in general, now exist to deal with the world's curses thus eliminating the existence of Wraiths and the need for Magical Girls to fight.

I assume at the end of the move where see a disheveled Kyubey Homura was forcing it to deal with said curses or even punishing it more, after all it's new existence is a form of punishment in itself

8
What do Homura's runes in Rebellion say?
5
How is the post-credits scene for the original series connected to Rebellion?
3
How does the third Rebellion movie relate to the series' storyline?
4
What exactly is Mami's power?
9
Why was there an apparent violation of the law of cycles in Rebellion?
9
How come the events of Rebellion are possible, with Madoka's wish?
10
How did Homura strip Madoka's divine powers in Rebellion?
4
Why do we see these witches in Rebellion?
5
How is Madoka not a god anymore at the end of Rebellion?