What is Aoi referring to when she says “Comaneci”?

In episode 4 of Tesagure! Bukatsumono Spin-off Purupurun Sharumu to Asobou, at around 14:16 into the episode, when they are talking about making a new school song, Aoi interjects with an obscure reference "Comaneci!". 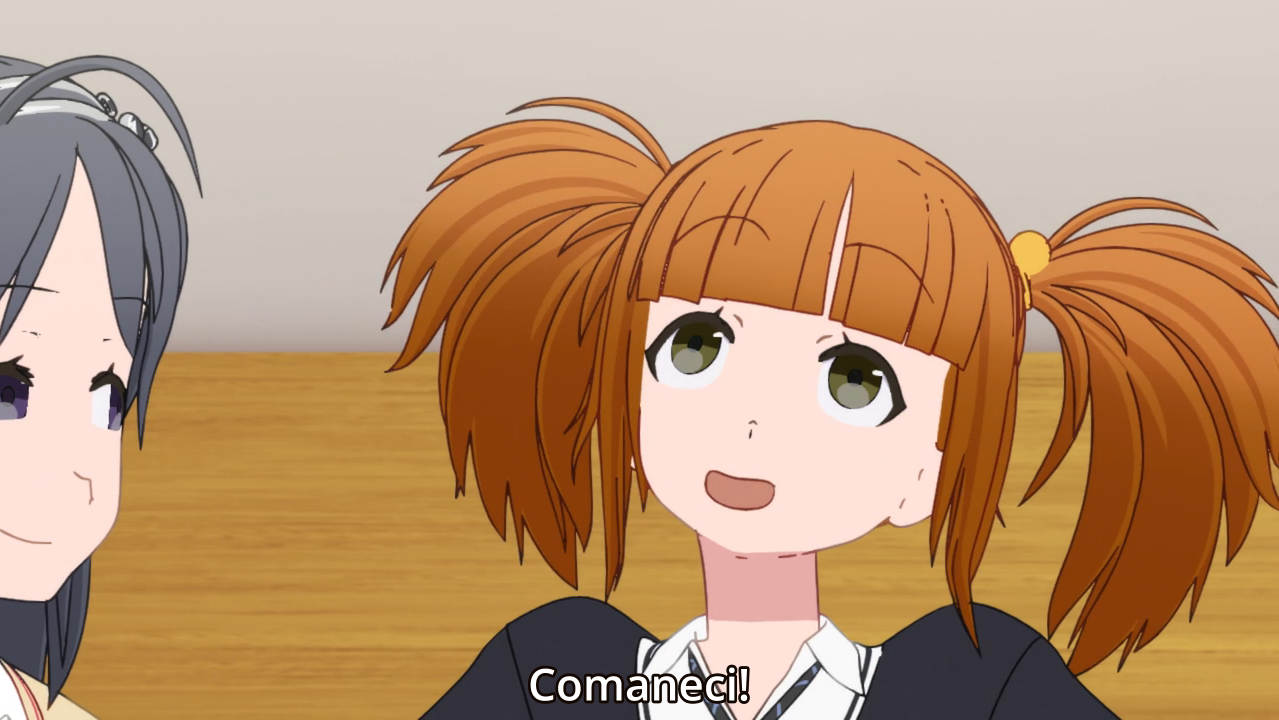 A quick search on the Internet point to Nadia Comăneci, who is the first female gymnast to be awarded a perfect score of 10 in an Olympic gymnastic event, among other achievements. However, I can't tell how it connects to the context here.

Below is the translated dialogue leading to the reference above:

Yua: Actually, starting this year, Tosei High School is going to have a new school song, and they're inviting people to submit lyrics, so I thought we would participate, too.

Koharu: Write the lyrics for a school song?

Hina: If the lyrics are used, they'll become a piece of school history.

Yua: All right! But before we actually think of lyrics, let's think about a "new school song."

Can anyone explain this reference and how it connects to the context of the episode here?

コマネチ is indeed Beat Takeshi's running gag from the 80s. It is in reference Nadia Comaneci's high-leg cut leotard, hence the V-shape motion. While the gymnast's pose is straight and beuatiful, Beat Takeshi does his motion with his legs apart, adding to the comical effect. Most people today, especially the younger crowd, might know the gag, but probably do not know the origin of the gag or the gymnast herself. Also note that the gag is consider a bit vulgar and therefore is not common for women to go.

If you know the nature of Tesasure! Bukatsu mono, you would know that it uses a prerecorded voice track method, where the voices are first recorded, then the anime was created to fit the voices. Most of the anime is ab lib, in other words the lines of the characters are completely up to the voice actresses, minus a few lines to get the ball rolling. Karin Ogino, the voice of Aoi, tends to spit out whatever is on her mind without much thought. She also likes vulgar jokes that are unbecoming of her job as an idol, and he has a tendency to repeat running gags. I doubt much thought was put into this line as well, other then perhaps because it is a bit vulgar.

Unfortunately I do not have that season's BD, so I can't check the commentary so see if it brings any new information to the table (Though the other season's commentaries weren't very "informative" either).

From Nadia Comăneci's article cited in the question, I suppose it is for the following reason: Comăneci was the first athlete to get a perfect score (10.00) when she was 14, a high school student. So, I suppose she's a piece of school history in her country.

I can't think of anything else.

Not the answer you're looking for? Browse other questions tagged tesagure-bukatsumono or ask your own question.