I'm on chapter 57 on Attack on Titan, and a "coordinate ability" keeps getting mentioned -- here by Hanji, but also earlier by either Bertholdt or Reiner (who apparently didn't want it to fall into the wrong hands). But what exactly is this coordinate ability?

I skipped a lot of the chapters up to 34 because they were just rehashings of the stuff in the anime, and I skimmed over a lot of the Survey Corps action in the woods, since it was getting too repetitious for me, so it's possible I might just have missed something.

Edit (taken from my comment in the answers): As an explanation to other readers, I was confused about this since at least in English, "coordinate" is pretty ambiguous without any further qualification. (It could be something geographical.) From the way Reiner and Bertholdt were talking about it, it sounded a bit like it could simply be a piece of crucial information that Eren might have in his lost memory. 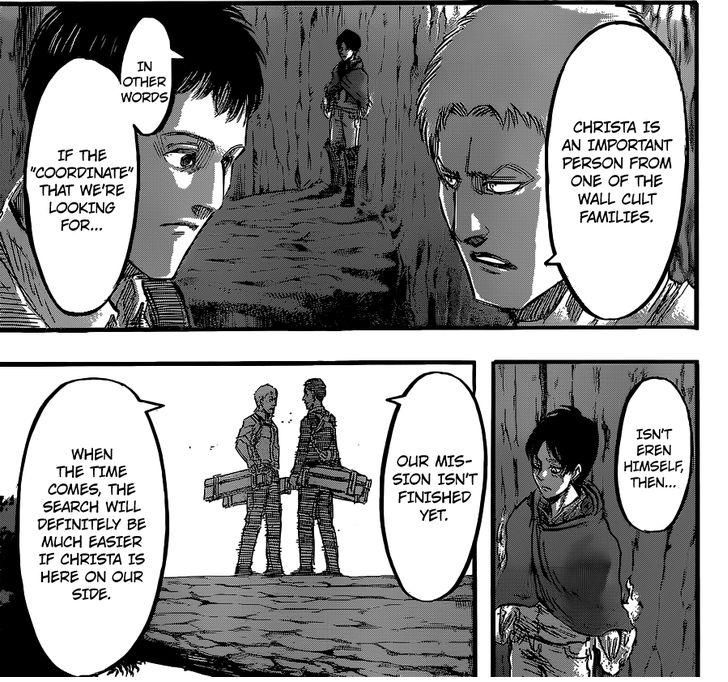 Moreover, because of how Hanji was describing it merely as a "coordinate ability", it still wasn't clear to me.

Titans can have different types of abilities, like shifting back to human form (aka Titan Shifters), or putting armor on themselves (eg: Armored Titan, Annie hiding the back of her neck, ...). The third ability that was shown, was that of the Coordinate.

The Coordinate ability is basically the ability to control Titans. If the ability is controlled properly it can command all Titans to do whatever you want them to do.

This is how humans were able to built the walls as sturdy and as big as they are right now.

As far as the story goes, it does not seem to work on Titan Shifters and there is supposed to be only one Titan with the Coordinate ability.

Although the Beast Titan was shown to have a similar ability.

the coordinate is the ability to control other titans (abnormals) but Eren never had that power. He only got it when touching the mother of Zeke, his father's first wife(the smiling titan) who was of the royal family.

6
Why is the Female Titan after Eren?

5
What's the secret behind Eren's key?
2
What's the purpose and origin of the titans which arent titan shifters?
2
In attack on Titan, what's the point of the shifter Titans becoming soldiers?
2
Doesn't Female Titan and Beast Titan have the Coordinate ability?
4
Why doesn't Eren's Founding Titan ability to control other titans work on Rod Reiss' titan?
5
Do individuals with the power of Titans posses the ability to time travel through the memories of future wielders of Titan powers?
0
Who would obtain Coordinate's ability if Historia was killed by the MP?
2
Why Willy Tybur claimed Eren could attack using the colossus Titans in the walls, if supposedly Eren can't control that ability?
2
Is Ymir Fritz dead or alive in the coordinate?