Would Nyu have developed murderous tendencies after enough time had passed?

When Lucy is forced into her 'Nyu' personality, she is reduced to a basic level of intelligence, with a diminished vocabulary and no access to her vectors. As the chapters progress, we see her begin to learn - specifically new words, like 'Kouta' and 'Yes'.

Early in the story, we learn that Diclonius children gain access to their vectors and begin to kill humans at around the age of 3. Given that Nyu is in a childlike state, and that she's learning much like a normal Diclonius child would, does that mean that she too would begin to murder humans after around 3 years?

Or would the fact that she isn't actually a child mean those consequences wouldn't occur?

I've already finished the story, so no need to worry about spoilers.

Side note: If I remember rightly, at some point in the later chapters (just before Kaede house is attacked), a particular event occurs where Nyu regains most of her intelligence, and can string together proper sentences. I can't remember exactly what happens, since it's been a while since I've read it, but for the question's sake, let's just assume that never happened, and Nyu stayed as she originally was.

Fyi: The snapshots are nsfw, so they are put spoiler tags.

Kaede has been able to use her vectors in Nyu-mode and is also able of speaking properly. During the 6 months timeskip of chapter 72, Nyu was able to learn speech and in chapter 87 she unlocked her vectors in Nyu-mode. See below for more details. It hadn't been three years, but you were right in thinking that she would be able to grow her second personality the same way she did her first. I guess she could learn faster at this stage, as her brain was fully grown by now, compared to when she was still a child. Kaede was also always seen as the more intelligent Diclonius, because she was able to reach a high age without being found out. And if it wasn't for her friend, she would have never been caught, despite being a child.

When Kaede was taken hostage by Chief Kakuzawa in chapter 86, he claimed that she had a split personality and that her Nyu-side could not use her vectors, just as you claimed. 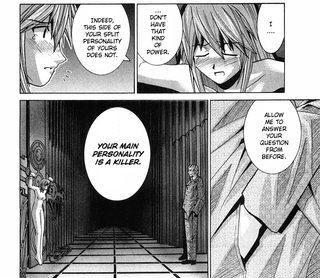 This argument was countered in the next chapter though. In chapter 87, we can see Chief Kakuzawa push Nyu to her limits, claiming that she has no place to go to and that they should create a new world together filled with real demons. Getting fed up with his story, she snapped and Nyu became able to release her full power, despite staying in Nyu-form. Chief Kakuzawa (and thus Lynn Okamoto himself) confirmed that she hadn't changed back to Lucy-form, despite releasing really powerful vectors.

Not the answer you're looking for? Browse other questions tagged elfen-lied or ask your own question.