What does rule XXXV mean?

If a Death Note owner accidentally misspells a name four times, that person will be free from being killed by the Death Note.

What does that rule mean? I think I'm misunderstanding it, and I'd like to know, what the rule really means.

The rules related to misspelling are:

So if we put all these rules together, that means that if you misspell a person's name four times on accident, that person is free from being killed from the Death Note forever. However, this does not mean you could make a person untouchable from the Death Note on purpose. The second rule from XXXV prevents this from happening. If someone purposely misspells someone else's name four times, he will kill himself and the victim will remain as is.

The manga seems to contradict this though. We have seen Light misspelling the name of a criminal more than four times, yet that person still ended up death. So if the rules are correct, it must be that one of the first four names Light wrote down was the real name of the criminal. Although I do find this a bit of a stretch, so I'm not really sure what is going on here. Ohba did make Light write down the criminal's name more than four times, but on the other hand, there was two occasions where he mentioned misspelling (rules IX and XXXV), so I'm not completely sure what to believe here. 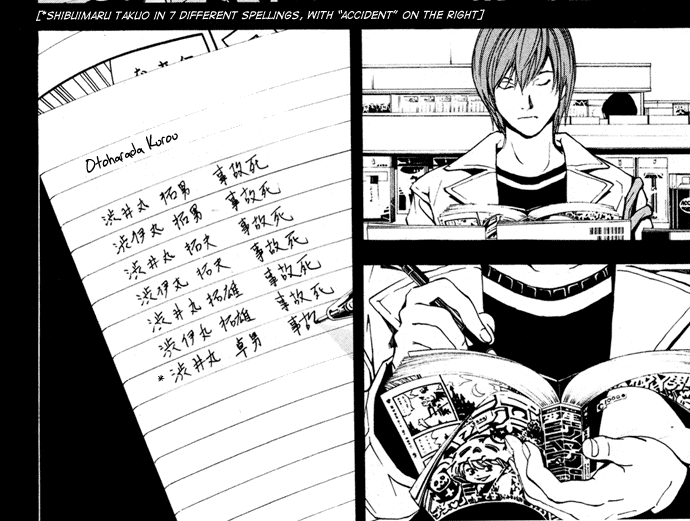 This bugged the crap outta me! I checked the Japanese wiki page, and what the rule actually says is "4度名前を書き間違えると..." which is to say, "on the condition the name is written incorrectly [make a mistake in writing] four times..." The verbal construction is often used in terms of messing up or omitting strokes when writing kanji. Since Yagami Light is the numba one student, he of course makes no mistakes in writing any of the kanji. So you can try as many times as you like, as long as you remember to cross your t(s) and dot your i(s). Penmanship matters, folks. :)

Addendum: or maybe Ryuk was just messing with people, or trying to get DeathNote-owners to be extra careful when writing down names.

26
What does this Death Note rule regarding visual acuity mean?
11
Can a person shorten their own life by using the Death Note?
2
What does the second part of rule VII mean?
3
Death Note 23 Day rule?
6
Is Ryuk the only one who can kill Light?
12
Will a person die when their name is written in the situation of death?
2
If a Death Note user specifies, along with the actual target, the name of a person whose face the user doesn't know, will that person live?
5
Does writing an alias in the Death Note count as misspelling the name?
14
Is Ryuk required to write Misa's name in his Death Note at the end of her life?
6
Did Minoru die because of the Death Notes' new rule or because Ryuk wrote his name in a Death Note?