Why does Killua get upset when Gon says "being weak is so painful" in manga chapter 214?

In chapter 214, just after Knuckle and Shoot left Gon and Killua to go to NGL, there is a scene where Gon cried, saying that he didn't realise that being weak was so painful. 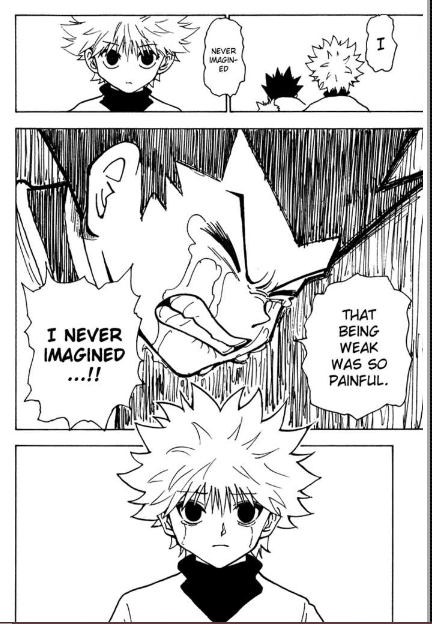 At the bottom of this page, Killua also cried, although I don't think the reason is explained clearly.

The next page explains that Killua intended to leave Gon after he spent 30 days protecting him.

(Could it be a mixture of the two - he felt that he was too weak and that was the reason he would have to leave Gon?)

Killua cries because he remembers that his own weakness of fighting with the aim of running away will cause him to leave his best friend, Gon, to die.

Killua was born into the famous Zoldyck family of assassins. His family has already decided that he would be an assassin, and put him through harsh training for that purpose, right from childhood.

After meeting Gon during the Hunter exam, Killua decided that he wanted to be Gon's friend and lead a normal life, not be an assassin. As they spent time together during the later arcs, Gon's friendship became the most important thing for Killua. It was also his source of hope for escaping from the life his family had pre-decided for him.

Shortly before this incident in the question, Biscuit points out that Killua's weakness is he fights with the aim of running away, and further notes that it would cause Killua to leave Gon to die some day. This wasn't a mean taunt by an enemy, but an assessment of his weakness by his Nen teacher, and he probably realized that it was true.

It would have been immensely painful for him to realize that his weakness would cause him to leave Gon to die, Gon being his best friend, the person who changed his life and gave him hope of leading a normal life. For that reason, he decided to protect Gon for 30 days, and then leave him forever.

When Gon says that "being weak is so painful", it resonates perfectly with Killua's own feelings, and so he cries too.

Killua has been one of my favorite characters since I first started this series. I really resonate with him emotionally, and just a few years ago (it's funny because I was actually 12 too), I met the person who would have the greatest impact on my life, my best friend, Alli. And I can tell you when I saw my best friend upset the same way Gon is in this chapter, it brought me to tears. Alli was crying because she wasn't able to do anything about a really bad situation in her life that she felt powerless against, and all I could do was watch her cry. Of course, when I saw how hurt she was, I began to tear up as well, though I didn't cry like she was.

To be totally honest, her personality is so much like Gon's that it really just astounds me to see scenes like this in the manga and anime and to see that that is what happened between us, as well. I can tell you countless stories of when we've had each other back, and it's sad to say, though a little funny to realize (I guess) because in the CA arc, their friendship begins to become painful and even a little unhealthy, which is exactly what has been happening between Alli and myself recently.

So I can tell you, for sure, that not only was Killua crying because he was going to leave his best friend, but also that his best friend was being torn apart by his own weakness and inabilities, just as Killua was, and that right before his eyes, Gon was crying, and he couldn't do anything to help him.

11
Could Alluka completely heal Gon?
2
How did Gon and Killua know they were being spied on when entering Greed Island?