When I watch the anime I get excited by Koro-Sensei's new student, Itona. He has many similarities with koro-sensei. So, my question is: why do they look different? Koro-sensei is like an octopus and Itona is like a human.

Itona isn't a relation of Koro-sensei.

He is the son of Horibe Electronics Factory's former president. After his father's company went bankrupt, Itona was abandoned by him which became a source of bullying towards him as well. One night, he was found by Shiro who told him that in his eye lies a tenacity for power and that he would help him achieve that power in order to grasp victory.

I presume the similarities lie in the tentacles. Itona's powers are manufactured by scientists, wheras Koro-sensei is an octopus alien. 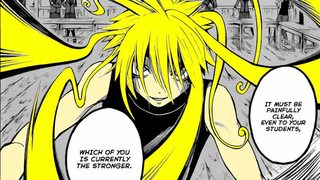 ... originally the subject of human experimentation. His powers are the result of the experiments that were run on his own body.

Itona is considered being Koro-sensei's brother because...

... he received his tentacles from the same scientists who experimented on Koro-sensei. His powers are inherited from Koro-sensei.

As for why they don't look alike:

Itona had his tentacles implanted into him. Those tentacles were most likely originally part of Koro-sensei's body after the latter turned into the octopus we now know and "love". Unlike Koro-sensei, his body didn't actually change.

Koro-sensei and Itona are not blood related at all, it's the tentacles that make them both fall in the same category "family".

This brother relationship was first mentioned by the official guardian, as to make Itona confused about his relationship with Koro-sensei. He intended to kill Koro-sensei with the help of an enraged Itona, but as obviously failed.

Koro sensei was actually human once , he was formerly the reaper before his apprentice turned him in and stole his name, he was then experimented on by shiro and grew the tentacles after escaping the facility and killing his best friend and destroying the facility.

2
How come Koro sensei had tomato juice inside jail?
4
Was Kayano's recovery affected by Heaven's Spear?
5
How did Koro-sensei's body change from humanoid to an octopus-like creature?
7
What are the difference between Koro-sensei and other tentacle creatures?