Why is it that the swordsman's attacks appear to do nothing until they click the sword back into its sheath?

For example, in One Piece, Brook, and sometimes Zorro, do some big attack with their swords, but the cuts are not shown until after they return their swords to the sheaths.

This trope is usually attributed to Fist of The North Star, after Kenshiro attacks someone he pauses and says "You are already dead". It is only then that they realise their defeat and the attacks are applied. 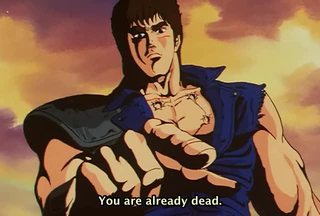 It's similar to how in Road Runner, Wilee Coyotee often runs off of cliffs, without realising the ground below him has stopped - he only falls when this is pointed out to him. 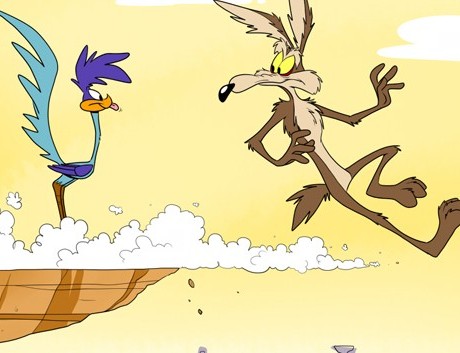 The usual rationale is that everything happens so fast that the character cannot register what is going on - and neither does their body.

This slashing technique is explained in Chapter 450: General Zombie Night. known as Hanauta Sancho: Yahazugiri (literal meaning: Three verse humming: Arrow-notch slash). The slash occurs at such a fast pace that it appears as if the swordsman simply walked past the victim. The victim feels the effects only after a certain amount of time, which is about the time to walk three metres (or ten feet) away. As Dr. Hogback points out, the victim continues to hum three verses, and only then realize that they have been cut. Further, he notes that only a "master" swordsman can use this slashing technique.

The swordsman sheathing the sword and announcing "I have already cut you", moments before the victim feels the slash is only because it looks cool. The victim would feel the effect all the same even if the swordsman just stood there doing nothing after slashing.

TV Tropes defines this as Delayed Causality. It is purposely meant for dramatic effect.

The in-universe explanations for it (if any) are often noticeably tongue-in-cheek rather than meaningful. There is nothing believable about cutting someone up with a sword and them failing to notice.

In One Piece this is more strongly associated with Brook, because his fighting style has emphasis on speed and "so fast they didn't notice" plays to it.

Did you ever experience being cut or injured and you notice it later because the cut or injury was insignificant that you fail to notice it until it's pointed out to you or you feel pain later due to a movement that depends on the place where you get injured or cut?

This trope isn't even really a trope in the sense that most tropes are. IE in being a sort of ridiculous event that is habitually used in modern writing due to it being an expedient plot device, and it has its origins way in the past, prior to any animation or movies even existing. It has roots in reality that go beyond movie/anime writing devices that provide dramatic effect.

It refers to becoming so proficient with your sword, your technique and human physiology that you can make a cut clean through some part of a person not only extremely quickly, but while encountering essentially zero resistance (such as from striking bone) In a technical sense, it would be because your muscle control, edge control, technique and knowledge are so perfect that - let's say in a decapitation - the edge of your blade naturally moves only in places in between the bones rather than a sloppier blow that's simply a wild chop.

If one was sufficiently proficient, they could deliver a single devastating, dismembering/fatal, blow that was delivered with such finesse and so perfectly that their opponent's reaction was vastly delayed as the lack of violence of the strike itself wasn't enough to even break their chain of thought, it's only when their eyes make contact with the wound that they realize something grievous has happened.

It's a little ridiculous here people thinking that they'd know immediately if they lost an arm or were otherwise struck with such a blow - as the body doesn't really have a discrete sense picture that goes along with dismemberment. The body plans on never being dismembered - and as such, it doesn't doesn't have a particular nerve signal that tells you "HEY, ARM CHOPPED OFF" and as such it can't differentiate between "OMG OW MY ARM" and "OMG YOU CHOPPED MY ARM OFF". Hence realization visually is a key component of knowing what's happened in this situation (which I point out only to be more clear regarding why this trope isn't really nearly as ridiculous as one might think at first glance).

Also, given a lifetime of experience as a human being, where every time you feel a pain in your hand, and you look down, your hand is always there. The one time it's not is definitely a shock, and assuming its removal isn't accompanied by the simultaneous shattering of every local bone and said cut was administered with aforementioned skill, technique and a very sharp blade, an appropriate reaction to it that fully understands its seriousness would most definitely be delayed, and it would be this way for any normal human being who doesn't spend their day to day expecting a limb to be missing every time they feel a twinge.

The effect, as a result of practice and technique is described as such in The Book of the Five Rings by Miyamoto Musashi - a 17th century samurai most well known for having won more duels to the death than...well, likely anyone ever (something like 60 duel to death wins between ages 12 and 30.) And a revolutionary master of the blade. One opponent of his was waiting to ambush him along with their friends and bodyguards after challenging Musashi to a duel; Musashi spotted the ambush and then still was able to run up to the man, remove his head with a single sword stroke and then get away unscathed despite the dozen+ other men waiting there thinking only about killing him,

So his credentials are solid. Yes it works for dramatic effect, but it's just not nearly as silly and outlandish as the answers here are making it out to be.

Not the answer you're looking for? Browse other questions tagged one-piece tropes .

15
Can Brook have another Devil Fruit?
8
What are the bounties of the Yonko?
9
How much has changed since the start of One Piece?
9
Who are the members of an early design of Luffy's crew?
3
Are Logia types overpowered?
6
Why is the written language inconsistent throughout One Piece?
1
Why the appearance of One Piece characters have goatee after time skip?
2
Why do characters in One Piece have weird signature suffixes to their lines?
2
Have the Mugiwara pirates ever cashed in a Pirate for a bounty reward?