Why do the subtitles say “tetsusaiga” for “tessaiga”?

I've been watching Inuyasha with subtitles and in episode 6 and 7, Inuyasha fights with his brother Sesshomaru about a sword. The English subtitle says "Tetsusaiga" but they're clearly saying "てっさいが". Why are they subtitling it in this way?

The reason why the subtitles don't match the dialog is apparently because Viz wanted to be consistent with their earlier translation of the Inuyasha manga. In the manga it's not at all clear that the sword should be named tessaiga (てっさいが) instead of tetsusaiga (てつさいが). It's a made up name whose kanji (鉄砕牙) could be pronounced either way. There's furigana in manga to show the author's intent but it doesn't make the tsu character clearly smaller: 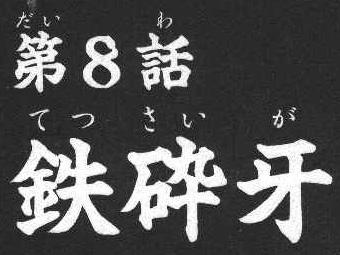 I found the above pictures in a Tumbler post that goes into more details about the mix up.

It seems it wasn't until the release of the anime that Viz had any reason to believe they were wrong, and I guess they decided it would be better to be consistent with their manga translation than the Japanese audio.

(I have to say though that all this makes me wonder if the producers of the anime version were just guessing as well.)

While it's tempting to chalk this up to a mistranslation by Viz, as Ross Ridge's answer suggests (and that Viz themselves might even admit to), I think if we take the question as seriously as possible, the answer must be that both names are correct, at least in writing.

The relevant background here is that Inuyasha takes place in the Sengoku period roughly 500 years ago. So Inuyasha's sword's name should be interpreted in the Japanese of the time, not modern Japanese.

On the other hand, the use of っ in Japanese is a relatively modern invention. The earliest known uses of it in this way occurred in the 19th century, and it wasn't standardized until 1947. Prior to this, double consonants in Japanese existed only as common slurs where only the consonant was pronounced. This form of slurring has existed for a long time, likely since the Sengoku period. I suggest reading this Japanese SE question for more information.

So, while 鉄砕牙 would have been written out as 「てつさいが」 in the classical Japanese of the time (or possibly in several other ways, as hiragana themselves were not standardized until 1900 with the removal of hentaigana), it could plausibly be pronounced as either 「てつさいが」 (tetsusaiga) or 「てっさいが」 (tessaiga) to the modern Japanese ear. But the classical Japanese speaker would have recognized these as the same word. Even this is something of a simplification, as pronunciation of these syllables has shifted over time, but without having audio records of Japanese from that time it's fairly difficult to know exactly what shifts have occurred.

That is to say, while tessaiga and tetsusaiga sound rather different to us, there isn't any distinction between the two in period Japanese writing, in the same way that "sorta" is just a slurred version of "sort of" in English. They're both valid romanizations of the same word, and so they're both really the same name. In some sense, saying that either tessaiga or tetsusaiga is correct is actually historically inaccurate. In modern Japanese, it's clear that they say tessaiga, but that doesn't really mean that tetsusaiga is an incorrect way of writing the name.

I guess the real reason for this confusion is that the text has gone through so many different linguistic steps that it would necessarily end up being somewhat confused. Of course the text is written in modern Japanese, but it's supposed to be a modern interpretation of historical Japanese. In order to romanize it, since there's no way to romanize classical Japanese, it first needs to be converted back into modern Japanese, and then to roumaji (which approximate Japanese pronunciation using latin alphabet characters). But the conversion back to modern Japanese is ambiguous, and so both tessaiga and tetsusaiga could be simultaneously valid.

With all that said, I don't think Inuyasha tries especially hard to stick to historically accurate Japanese, so to some degree this is a moot point. I just wanted to point out that, strictly speaking, in Sengoku-period Japanese, there is no way to differentiate the two words. On the other hand, for practical purposes, one can hear that the anime uses tessaiga for pronunciation and writes てっさいが as the furigana, so presumably this is the more understandable choice in English.

Not the answer you're looking for? Browse other questions tagged inuyasha or ask your own question.

3
What do “sama” and “kun” mean? Are they related to the shinobi rank?

9
Why is Koga so different from Inuyasha?
4
How does the portal in Inuyasha work?
6
Why Is Sesshoumaru a full youkai?
2
Mechanics of the Inuyasha love triangle?
3
What is the song that plays every time Kikyo appears with Inuyasha?
3
Why does Inuyasha stop using Blades of Blood after the first few episodes
3
What order do the events from the “Inuyasha” series (movies included) occur in the timeline?