After Hagoromo Otsutsuki gives his Yin chakra to Sasuke, Sasuke develops a new dojutsu in his left eye. 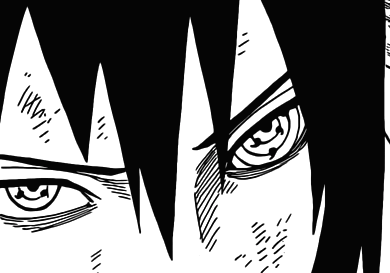 Is this dojutsu the same one as Kaguya and Madara's third eye?

In both cases, the eyes have circles and tomoes in them.

No, Sasuke's dojutsu is different from Kaguya and Madara's third eye.

Sasuke has the Rinnegan while Kaguya and Madara have the Rinne Sharingan.

Both the dojutsu might look similar in design, but they're not. 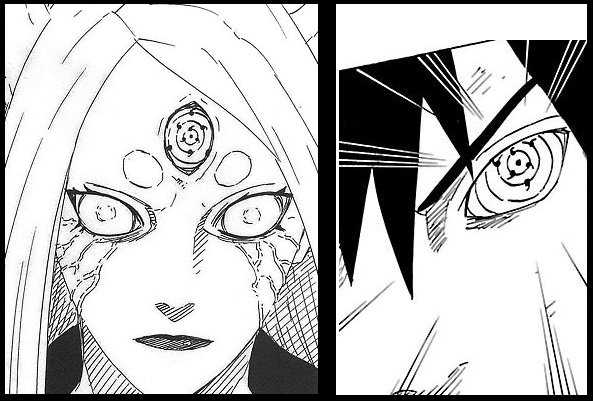 A side-by-side comparison of the two dojutsu shows that although they have similar circles, the Rinne-Sharingan has nine tomoe whereas Sasuke's Rinnegan has 6 tomoe.

Another visual difference between the two is the color. Later in the manga, their colors were revealed.

- Madara and Kaguya's Rinne Sharingan is red in color.

- Sasuke's Rinnegan is purple in color, just like a normal Rinnegan.

Therefore, it is clear that both the dojutsu are not the same and what Sasuke has is a Rinnegan.

6
What happened to the tomoe in Sasuke's Rinnegan?

5
Do both Kamui Sharingans share one dimension?
4
How does transplanting different sets of Sharingan eyes work?
10
Why does Sasuke still have the Rinnegan?
8
Sources for Christian themes and motifs in Naruto?
2
Do Sharingan users experience its full potential when having mixed stages of eyes?
1
Does Sasuke have only one Rinnegan eye because he only got half of Hagoromo's chakra?
1
If Nagato has both of Madara's Rinnegan, how did Madara still have one Sharingan when he met Obito for the first time?
8
How did Madara really obtain his Eternal Mangekyou Sharingan?
1
Can't Kakashi take Obito's Sharingan, and Sasuke take Madara's Rinnegan?
1
Does Naruto ultimately find an answer to Nagato's question about how he will break the 'cycle of hatred'?