When I watched episode 25 of Death Note (AKA the one when L, Watari, and Rem died), I noticed that Light was strangely kind to L. Is that because he was nice to L before he died, or because he actually thought of L as a friend? This is something I have been pondering over ever since L said that Light was his only friend.

This might be my personal opinion, but this does not look like the face that a person would show his friend when that friend is dying. Light had been pretending to be L's friend for a while, so by (over-)reacting he achieved two things. The first would be keeping his image and the second would be giving him a reason to go looking for the Death Note, that he knew would be laying around somewhere. 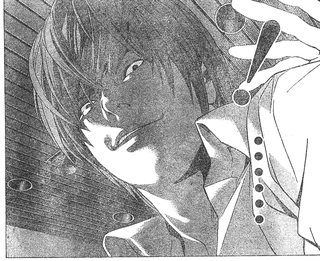 In the Chapter 32 (Vol. 4), Light was thinking if he should kill L or not, and then Ryuk said he thought that Light's doubt was because L called him his friend. Then Light answered that on the outside, Ryuuga/L is his friend, but actually L is Kira's enemy. And in various other pages, you see Light thinking about "killing L" - hardly a thing a friend would do. So, no, Light (at least with the memories of being Kira) doesn't consider L truly a friend, it's just part of his acting. 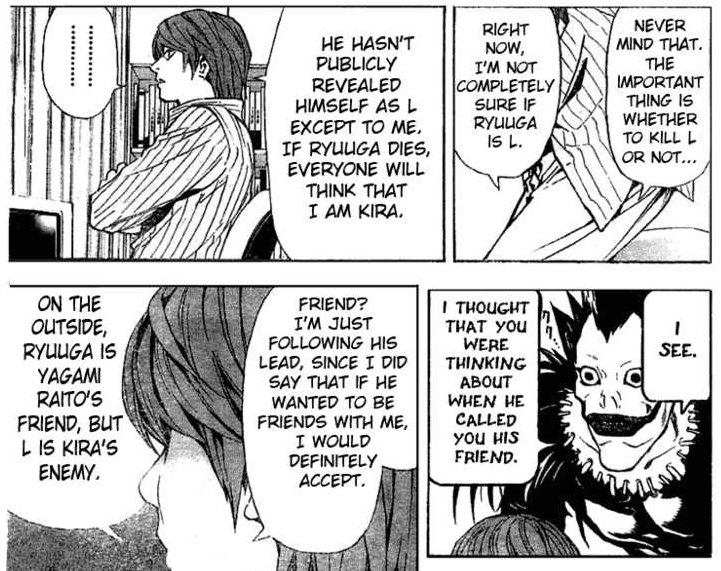 No, he only saw him as an obstacle, but I assume he respected him. Otherwise he would not have gone to such great lengths to kill him.

What is interesting and what I feel is not really considered by fans, is that Light and Kira are the same person.

His Kira self is more dominant, but based on how Light was seeing L when he looks at the empty chair, and laments on how things aren't interesting without L, and even cut scenes to Light's blank looking face when he's on a date with Misa right after his lamenting about L being gone, it gives off the idea that Light, somewhere deep down, misses L.

He misses the challenge, he misses his "friend." Even though L was Kira's enemy, Ryuuzaki was Light's friend. They had much in common, they were equals, literally no one could match up to them the way they did to each other, so no matter what, Light found something unique in his relationship with L. I do not believe he never cared at all.

It's just that he cared about being God of the New World far more, and thus was willing to throw away everything else for it.

There are many animes I have come across that have characters with split personalities. I think this is the case with Light. I believe Light is not truly evil, but his other persona (Kira) is. I think this is also the case for Light and L's relationship. Light does consider L as a friend whereas Kira sees L as his enemy. Although many fans think Light acted a lot, I think there were plenty of moments where Light and Kira were in conflict inside Light. As I read elsewhere, If Light had never found the death-note and became Kira, he would have become a detective alongside L and the two would be friends. I've also come across many scenes where Light seems to miss L.

When L confessed He thought of light as a friend I think on a conscious level it was simply a ploy, but there actually was some kindling of empathy. Also even though L admitted, ‘I think I wanted you to be Kira’ When he died he had a wide eyed expression seeing Light smile as if he had just been betrayed. As for Light, he never seemed to portray much kinship for L. Nevertheless I think it would be wrong to assume he hated Light. In episode 36 near is wearing a mask of L, and you can hear Light thinking of how it is dishonouring L, which is really strange considering Light plotted his death. I don’t think L and Light were really friends, but subconsciously I think they both knew that under different circumstances they could’ve been, and I think that shone through when Light first brought L in from the rain. Also in lights last moments when he’s dying, he sees L. You’d expect him to see his dad as when people pass, they tend to have visions of those they have loved who have passed away. Instead he sees L, I think he really did care for him.

No he did not think of L as a friend (beside when he lost his memories).Light was trying to make L think he was not kira and also light tried killing L. i'm pretty sure he would of killed L if he would not be seen as suspicious if he did.

I personally don't see them as “friends”; both are fundamentally against each other when it comes to their perspectives.

But, that doesn't really mean they hated each other. There are hints that Light and L would have been friends under any other circumstances.

But, that's beside the point, the way I see it… Light and L have respect for each other. Light and L never really had a serious “game” with others before. Light saw in L a chance to prove his worth: if he won, he would be right, and if he lost, he would be wrong. This is evident in his slow decline into insanity as soon as L was out of the picture. With L being the best the world has to offer in opposition to him, he was to be a god, right?

So, ultimately what Light felt towards L was something you or I would feel towards a boss in Dark Souls. Respect. Begrudgingly or not, Light saw his equal in L (even though L is canonically smarter than Light…), and once he was gone, he didn't feel as much excitement when going up against his successors, ultimately leading to his defeat. He never really gave them as much effort as he did to best L.

Again, this is my take on it.

10
Why was it that Light's father could see Light's lifespan, while Mikami couldn't see it (which allowed him to deduce that Light was Kira)?
5
Why was Ryuk tied to Light's Death Note?
8
Did Light truly love anyone?
1
How did Kal Snyder end up as the death note owner?
1
How did Light know that Hideki Ryuga is the real L?
1
How did Light went unnoticed by his dad?
14
Is Ryuk required to write Misa's name in his Death Note at the end of her life?
3
What would Light Turner's "Conditional" Entry in the Death Note actually do with the canon rules
3
Is Light's insanity influenced by the Death Note, or did he make himself become that way?
6
Did Minoru die because of the Death Notes' new rule or because Ryuk wrote his name in a Death Note?